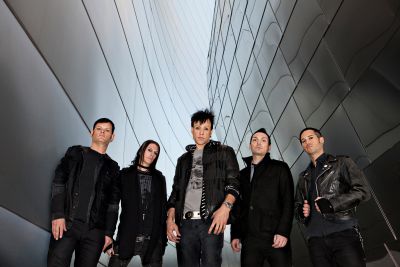 S] Hi Jay! What are some of the older, more “classic” tracks that you enjoy performing now in 2012 and why?

J] “I like playing all the older songs. In fact, on this US tour, apart for a couple mash-ups, the only songs we are playing are old ones. Only one from the third record [‘Punk Statik Paranoia’ and the rest all from ‘Candyass’ and ‘Vapor Transmission’.”

S] We hear you’re planning on producing an EP? Can you talk to us about the themes and ideas on that?

J] “Yes, in fact we started working on it officially yesterday. It’s still relatively new songs that we are sorting through now. So, as far as themes and things go, we haven’t really gotten there just yet. As far as the sound goes, I am really gonna try to make an awesome rock and electronic dance music record, smothered in dubstep. Then, I’m sure everyone will get me to bring it back down to earth a bit, but I’ll put up a good fight at least!”

S] Is there a new song that you can focus on, where you can talk about a location or a person that influenced it?

J] “Well I can say that there is a track I’d like to use, that I am writing about what it must be like to live through my little boy Jax’s eyes, ‘cause I find myself constantly thinking about what his take on all of this is. Kids see things in the most unusual ways, or unusual as far as they are concerned at least!”

S] There’s a collaboration with Skrillex in the works – how did that come about?

J] “Yes, well I met Sonny [Moore] through a mutual friend Joey Simmrin who is a manager, and works with some artists I was writing with at the time, and Sonny was over at a good friend of mine’s place Jon Feldman who is a huge producer, and was producing a track for Sonny’s rock project. I had asked Joey to introduce us, and after a few conversations and a couple parties, he ended up at my place and laid down a ‘sick’ beat. The rest, well I guess we will all have to wait and see. It won’t be too long though!”

S] What do you think of the modern industrial and electronic music scene?

J] “[Laughs] Is there even an industrial scene anymore? Hey wait, I’m trying to bring a bit of that back! Anyhow, I’ve never been a huge fan of totally industrial music, but I do love Ministry, Skinny Puppy and Nine Inch Nails. That said, I have been to a lot of empty goth and industrial bars in recent years, so I’d have to say it’s hurting at the present time. Maybe I should just do an industrial record, and try to help revive it? That’s a tough one.”

J] “Band break ups are a bit like relationships with psycho ex-girlfriends, and that’s attributed to the fact that musicians are all nuts, or we wouldn’t even bother doing this. The heartbreak versus the glory isn’t exactly a sure shot, you know? I mean it’s so hard to do this for years, and finally get your lucky break, only to have it fall apart eventually. So what I’m saying is I can certainly relate to what some of the former members might be feeling, but I think we will all end up getting through this thing just fine. I saw a couple of the guys you are referring to at a bar the other night, and I didn’t hit anyone. In fact Ryan [Shuck] offered to buy me a drink, and I accepted, and we ended up taking a pic of us and posting it to let people know that we still care about each other. Hopefully things will get fixed in the mix.”

S] Would you ever bring back that older line-up, given that you have a brand new one sorted now, and have official terminated their involvement?

S] “What’s the feedback been from old (and new) fans to the updated line-up?”

J] “For the fans that went to the shows, and actually saw the band play live, I’d have to say they all loved it. Everyone I had spoken to came straight away saying that the new band is awesome, and they enjoyed the shows. There were definitely people that wished they had gotten to see it with the all original line up of course, but even those die hard fans seem to like it a lot.”

S] When will you be touring Europe – is that feasible?

S] Further to that, have you changed and developed as a musician, and personally over the last seven years?

J] “I certainly hope so. I have been an advocate of ‘the new’ since I started this band, and in this business, so I wouldn’t  want to short change myself or anyone else by not coming with a fresh new perspective on the sound. That would suck. I’ve gotten into being a DJ and all sorts of other things over the hiatus. My skills as an electronic artist are better than they have ever been. It’s all relative though, people have to listen to determine that ultimately so if they are in, then I guess that would be a yes on all accounts.”

J] “I’ve had plenty then, and plenty now, but the moments I think were some of my personal favourites, would be Ryan Shuck and I going into truck stops wasted and then myself videotaping Ryan talking to truckers, who were obviously ready to kick the sh** out of us, and things of that nature! [laughs]. I have always been into making it fun. Go big or suck it!”