The straight-up rock sound of Pure Love may have come as a surprise to those familiar with Frank Carter and Jim Carroll’s previous work – Carter having previously found fame as the frontman of Gallows, and Carroll having played with Boston-based hardcore bands such as The Hope Conspiracy and The Suicide File. July saw Pure Love embark on their first headline tour of the UK, and we caught up with Frank and Jim at The Duchess in York to discuss their new direction and forthcoming debut album ‘Anthems’ (due for release on October 1). 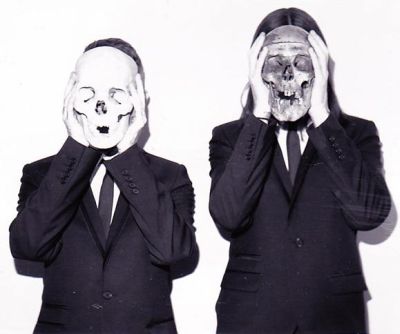 “This band is inspired by happiness” – Frank Carter

S] You both started off with a background in hardcore punk bands and you’re now doing something completely different. Was there a specific moment or event, or a particular factor that made you think ‘I need to do something different now’?

Frank] “Scissor Sisters’ album came out, and then I was like ‘I’m in the wrong band’…nah, not really! There wasn’t a specific event, it was just…for me, I’d been playing with Gallows for seven years, and it just sort of ran its course, basically. It’s very hard to keep that level of intensity up without burning yourself out. I’d spent the last year sort of sitting around not doing much as well, we weren’t writing, we weren’t really playing that much. So I put the word out that I wanted to start a new band, Jim’s name came up and we’d met before, and then we just slowly tried to get it together. I think the very first night we actually managed to sit down and talk about it, he went home and sent me 20 songs, I put lyrics to one of them that night and that was it, the band was formed. It’s never been a conscious decision to say ‘ok, I wanna do rock music now’, it’s a very organic process, it’s just the way it happened. Jim writes naturally very poppy, rocky songs, and my voice lends itself to that. I’ve always written hooky lyrics, I’ve just never had an opportunity to really sing, so it’s been nice to meld the two together.”

Jim] “Over the years I’ve been in rock bands as well as hardcore and punk bands, it just so happens that the more popular ones were hardcore and punk. It’s always been something that I’ve done and like he said, it’s just how I write and how I’ve written for years, so it’s very natural.”

S] So, you immediately realised once you got together that you were both very much on the same page?

Frank] “It was day one. In our text messages we’d kicked around the word ‘hardcore’, and then when we met, Jimmy was like ‘It’s going to take me a little while to write some hardcore songs, ’cause I haven’t written like that for a while,’ and I was like, ‘I don’t know if I wanna do that’ he immediately was like, ‘ah, awesome!’ I was in a hardcore band already, I didn’t really want to be in another one. So then he was like, “Well, I’ll send you over some song ideas that I have,” and he sent them over and it was perfect, exactly what I was looking for, so from there it was straight, smooth sailing basically.”

Jim] “Yeah, for the most part, it’s usually like, I’ll send Frank an idea, usually a verse and a chorus of music, and see what he can put to it, or he’ll send me a melody idea and I’ll write music around it. But for the most part it’s very even.”

Jim] “Yeah, exactly, we’ve found very quickly what we can work with.”

Frank] “We both know our limitations, and I think it’s a good place to be, no-one’s trying to be anything they can’t. We’re constantly pushing ourselves, and myself particularly I’ve been pushing hard to make my voice as strong as it can be and find my own personal limitations, my range and that, but that came pretty quick. After that it was just a case of settling in to the sound and honing the songs.”

S] Does it feel good to have a fresh start, work with a new band and build from the ground up?

Frank] “It’s amazing. I mean, it’s hard work, we are literally starting from scratch. Doing a tour like the one we’re on now is hard as the headliner when you have no real songs out. We’ve got two songs out, and so you see a change mid-set when we play those songs, everyone knows them and they can get into it. You can tell that they’re really wanting to like the music, they just don’t know it. So it’s a really positive place for us to be, it’s been a lot of fun. Everyone in the band is a good friend of ours, so it’s nice to be on the road with our friends and just playing good rock songs that we love, we’ve really put a lot of faith in this.”

S] We did actually see you play at Dot To Dot in Manchester and it did genuinely feel like you were having a lot more fun with it.

Frank] “Oh yeah, totally! I mean these songs are celebration songs, all the lyrics were written over years and years! There’s some stuff here that was written five years ago that I’m just pulling out now to try and find a home for. It just happened that when Jimmy would send me songs, the melodies fit. Whenever I write a song I’ll instantly have a melody in mind, so I’d be listening to his guitar and thinking ‘F**k, I’ve got something, I know I’ve got it somewhere!’ and then it’s just a case of finding it on whichever laptop or hard drive it might be buried on. It’s been super chilled, the whole emphasis of this band is fun…I do not wanna do this just to punish myself any more, I’ve done that for long enough and that’s not really healthy for me. If you perpetuate hate for a couple of years then that’s all that’s really gonna come your way, so this for me is just about enjoying my life, having a great job and making the most of it.” 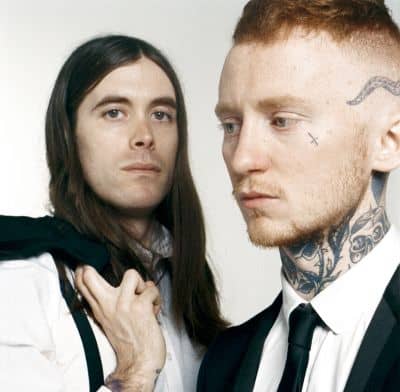 S] Would you say it’s the band that’s had a positive influence on your life, or was there positivity in your life that influenced the band, or a bit of both?

Jim] “I’d say there’s a little bit of both. When we first started this I think we were both in a place where we weren’t really having a good time, and this ended up being our outlet for that. Certain songs came across as, y’know, I’d write it after a bad day at work and it’d be a downer song, but there were other songs where you needed something a little uplifting, and that would help the negative aspects that were already in our lives.”

Frank] “I think at the time we were both in a fairly bad place, when we started the band. You’ve gotta remember that, although the album’s not out yet, we’d been writing for a year together before we got signed, and we only got the band together in January of this year. So for us, this is nothing new, we’ve been doing this for a long time. A lot of those earlier songs were definitely a bit more moody and had a slower groove to them, but it became like our sanctuary, our bastion, where we’d go and write no matter how shitty the day had been. So in the beginning maybe the band was the positive influence, but as it’s developed it’s created its own positivity…it’s inspired by, and inspires happiness.”

S] To move on to the the album, are you suggesting that the songs that are on there are the ones that have come out of your more recent writing sessions?

Frank] “Yes and no, because there are songs on there…I mean, ‘Beach Of Diamonds’ and ‘Anthem’ are old! They were ‘early days’ songs really.”

Jim] “There’s a good mix. When we went into the studio we went in with about 30 songs, and we had the intention of cutting it down to 10. Then we wrote two new songs in the studio, so that was its own good problem to have. We ended up cutting it down to 11, and we still have a bunch more. Whether or not we’ll go back to them, we don’t know, but it’s a good problem to have, having too many songs.

Frank] “It’s a good mix of our discography, of a year of songs. Some of the latest stuff that we’d written in Brooklyn just before we went in [to the studio] got cut, so it is really weird what made the cut and what didn’t. It’s was purely feel, whatever felt good at the time made the cut, so it was very much a product of its time.”

S] The album is called ‘Anthems’, and you’ve suggested before in interviews that it’s ‘exactly what it says on the the tin’. But do you think there are any songs on there that might surprise people?

Frank] “I think the whole record will surprise people. We were discussing this the other day…I feel like we’ve managed to carve a sound out for ourselves as a new rock band, but when you listen to the album every song is totally different. And I know it’s easy to say that and it’s another thing to deliver, but I genuinely believe that. Even the two singles that are out [‘Bury My Bones’ and ‘Handsome Devils’ Club’], they are quite vastly different in sound, in style and influences, but then you’ve got a song like ‘Anthem’ which just drops the whole thing, ‘Heavy Kind Of Chain’ is all about dynamics as well, and then ‘Pilgrims’ at the end as well…I think the whole album will be a surprise to people. The handful of songs that they know when the album comes out, on first listen, those will be the rocks they cling to, but after that I think it’s gonna be the whole album…it just has good songs. I genuinely believe that every song is a great song in its own right, and even the slow moving songs are like fu**ing great, moody emotional songs. It’s a great album, I’m really proud of it – musically I think it’s the best thing I’ve ever done.”