We managed of catch up with Radkey whose EPs have catapulted them in their rise to world domination. With the release of their first full-length LP later this year it’s all very exciting in the Radkey camp. We sat down with Isaiah (bass) to talk touring, writing, influences, video games and zombies! 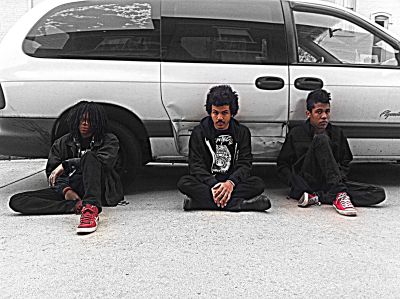 “I think we’ve lived more last year than we have in our entire lives!”

Radkey’s popularity in the UK has soared recently and with another spate of touring due to take place later this year things are about to get messy as Isaiah says: “We’re really excited to come back as headliners this time. All the places we’ve hit up before have been really cool and it’s been some of the coolest times we’ve had being on a UK tour and we’re really stoked to hit it again.”

Radkey have previously toured with Soundsphere favourites Drenge from which Radkey take influence from but this is not Radkey’s only influences as Isaiah remarks: “There are bands called Liger and Turbogeist that we are touring with, and there’s a band called Throne that is one of our favourites and of course the Arctic Monkeys are pretty fantastic.”

It seems that all the hard work has paid off for Radkey as they scored a slot at Download 2013 which absolutely thrilled the trio. “Everyone takes their festivals really seriously which is really cool. When you play a festival you know it’s definitely going to be cool and you know you are going to be in for a good time! The vibe in the UK is great. It’s a real treat to come and play!”

Radkey’s influences are very diverse and with the recent release of the ‘Feed My Brain‘ EP these influences have expanded even more into Radkey’s writing to create bigger and better songs. On recording and writing, Isaiah says that: “We’ve been on the same influences as far as song writing has been going. I just think we’ve been getting better and better at writing songs. We mostly just write in our bedroom and music room. We’ve actually been doing a lot of writing on tour. A lot of the songs that we have been finishing up have also come up on tour so that’s one of the best places to write!”

All this writing is culminating in the band’s first full length LP due to be released later this year, a busy yet very promising year for Radkey in general. “We’ll be recording an album this year which will hopefully come out in the fall. I’d like to think that the EPs are kind of a taste of what’s to come. We’re going to take some vibes from some of the stuff that’s on the EPs but I also want to create a newer type of sound which I already think we’ve created with ‘Feed My Brain’. Hopefully we’ll be able to compile the best of what we do.”

The debut album of any band can be a stressful undertaking but Isaiah is cool and optimistic for writing and recording the first album. “As long as we keep writing on tour and have time to come off tour and write at home I think we should be fine. As long as we hit it in a relaxed way and not rush anything and let songs out as they come, hopefully we’ll record the album in a two week session.”

Although Radkey are a bunch of young whippersnappers it’s clear that their song-writing skills have matured and got better over the short amount of time they’ve been on the scene. In terms of improving their musical style they have come leaps and bounds and the boys in Radkey are absolutely loving it. “I think we’ve lived more last year than we have in our entire lives! Music has definitely changed us to work a lot harder and shoot for something as well as having a goal. We create things to the best of our abilities. It’s definitely changed us for the better!” The focus and determination that Radkey have found on their musical journey has helped them a lot to make the band bigger and better. The challenges that the band face are few and far between because of their love for music and touring. ‘Most of it comes pretty easy because we feel lucky to be able to do it. We love touring and we have no reason to complain there. It’s mostly just little things that are hard like laundry!’ A tiny obstacle like dirty underwear is no match for Radkey’s unstoppable rise.

Despite the heavy work load, the guys in Radkey know how to chill. “We do all kinds of stuff like watching anime, playing video games and watching a bunch of movies. We pretty much just hang out whenever we are not writing. Whenever we feel like we’ve done a lot of work on Radkey then we’ll take a day or two off otherwise the band doesn’t become fun. We try to take it in a relaxed kind of way.”

We take the opportunity to ask Isaiah some crazy questions such as what weapon he would carry into a zombie apocalypse: “I would probably go with a metal baseball bat because it would be pretty quiet and quick I imagine for killing zombies!” A useful choice indeed. When the guys aren’t jamming up riffs for the new album they are often playing video games. If they could swap any video game soundtrack with their own music it would go something like this: “I would  want to do that for either ‘Skyrim’ or ‘Halo 4’ I think. For ‘Skyrim’ it would be really funny and cool and for ‘Halo 4’ – I feel like it would pump me up!”