At Bloodstock Festival 2013, we were lucky enough to get to chat with the lads (Guff Thomas [guitar] and Dan Cook [vocals]) from RSJ. We get some insight from the York metallers about their upcoming album, their influences, and their advice to the new bloods. 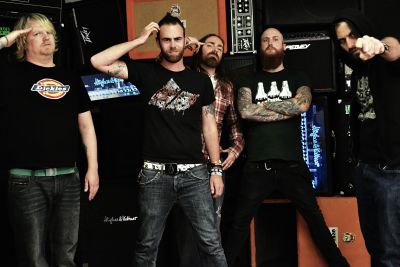 “We’re gettin’ our arses into gear, and getting this record out” – Dan Cook

S] You guys looking forward to getting on stage?

D] “It’s a lot bigger than we thought, but it’s cool. Hopefully it’ll pack out.”

G] “And it sounds massive. We’ve got a really good sound guy called Russ Russell, he does Napalm Death and stuff like that, so he’s gonna make us sound mint!”

S] Any band you’ve seen you’ve really loved or anyone you’re looking forward to in particular?

D] “You know what? Every time I go to see someone I miss ‘em. Got a plan of everyone I wanna see, but I’ve missed them all up to now.”

D] “We caught a bit of Earthtone9, that was cool, just watched a bit of Diesel King, but I keep gettin’ bands mixed up, every time I go see a band I’m like ‘They aren’t who I thought they were’, so it’s bit strange.”

S] It’s good to discover new ones as well.

G] “Well, that’s the best thing about festivals, isn’t it?”

S] Definitely. For you as a band, what is it that makes metal such a strong force?

G] “It’s very underground, and anything that’s underground will always carry on.”

D] “It never really peaks, so it just keeps going. ‘Cos once you’ve peaked you’ve had it. It’s constantly there. People say it sounds the same, but there’s a massive variety of genres just within metal itself. There’ll always be music there for artistic people.”

G] “Pop music is just pop music, but metal always changes. I always think I’ve heard the heaviest thing ever, and then some little kids come out and it’s like ‘Christ, how heavy is that?!’ and it just gets heavier and heavier.”

S] It’s been a number of years since your last album, so I have to ask, is there anything in the works at the moment?

G] “There is, yeah. We just keep changing management, and we’re sat on a finished album, finished video, planning the next video, and we’ve already written half of the next album. It’ll be out soon. It’s worth it. It still sounds fresh now even when we’ve been sat on it for a while, but it sounds really good.”

D] “We’re really lookin’ forward to gettin’ it out, ‘cos there’s a lot of people asking about it. But we don’t need to be like Guns ‘N’ Roses, y’know, fourteen years later. Probably will be, knowing us. But yeah hopefully it should be out soon.”

S] Your music is pretty damn heavy. What influences you musically and lyrically?

D] “Lyrically it’s honestly whatever’s on my mind at the time. It’s nothing really major, just experiences. You can’t really write stuff that you haven’t experienced. It sounds crazy, but it is a lot of lovey-dovey stuff, but that’s where problems always are in your life.”

G] “Musically, we just write songs that we wanna hear. There’s no direct influence from anyone really, we just do our own thing.”

D] “And I think that’s better. With our music a lot of people say you can hear all our influences in every song, and I’m more proud of that, because if you sound like one band all the time you’re never gonna get anywhere, or your songs sound like one band.”

S] Any songs in particular you like to play live, or ones that get the crowd moving?

G] “We’ve got a song called ‘Running With Scissors’ and that always seems to go down really well. ‘Oceans’ is really popular too.”

D] “We’ve just added it to the release. It’s a nice one, it’s a bit different from our other stuff, but it’s a nice one to play, it still fits. It’s a lot heavier. We don’t try and write heavy music, it just ends up that way.”

S] There’s a lot of bands trying to make it in this modern age. As a successful band from the North what advice would you give to bands starting out?

D] “Too many bands give up early. We see bands quitting after like two or three gigs, but it takes a long time to establish a name, and you can’t give up on it that easily. We enjoyed it more when we decided we were just gonna do what we wanted to do, and play what we wanna play. I think that passion shows, and that’s why we’ve ended up getting such cool gigs. When we tried to get ‘em we couldn’t get ‘em [laughs] and now we just get handed ‘em.”

S] Being a York band, would you say it’s vital to move to a big city to ‘make it’?

G] “The internet’s a massive thing. You don’t need to be in London, you can send anything anywhere now, you don’t need to be anywhere at all. I think it’s quite nice to be somewhere different. I’d hate to have to move to London just to be in a band. I like living in York, it’s nice.”

D] “I know loads of bands that have moved to London to make it. Everyone’s in a band in London, and now, instead of there being like twenty bands, there’s twenty thousand bands, so it’s even harder to stand out. People say living elsewhere hinders you, but it really doesn’t. What hinders you is if you’re sh**.”

S] Being in a band is a lot of hard work and commitment and you guys have been around for over ten years now. What keeps your mindset strong?

D] “This. Coming to festivals.”

G] “Can you imagine not being able to do stuff like this? It would be so boring. We’ve been doing this twenty years or something stupid, and I can’t imagine doing anything else, so I don’t need any motivation, it’s just what I do.”

D) “We just love it. We just like hanging out with cool people and having a good laugh, then you get a chance to show off for half an hour, be an idiot and get away with it.”

G] “Get this album out! We’re just waiting to get the CD out, get the video out, then crack on with the next video, and writing songs, then out gigging.”

D] “We’ve got a mini tour in October, then a few little gigs to keep us happy, but it’s all about gettin’ this album out finally and getting our arses into gear.”