Singer, rapper, poet, writer, actor, director; whatever Saul Williams turns his hand to appears to turn into artistic gold. His creative talent has given him worldwide recognition. This artist is known for his edgy and unique style, and his collaborations with the likes of Trent Reznor and Zach De La Rocha that demonstrated his great impact within both the music and creative industries. 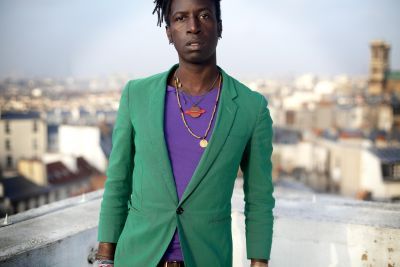 “There’s this passion inside of me that burns”

Saul has come a long way from his childhood in the ghetto. Growing up in New York, Saul lived on a musical diet of hip-hop. He says, “During the eighties in New York, if it wasn’t hip-hop, I wouldn’t f*** with it.” However, as he grew up, he realised that the hip-hop he knew was gone, “The stuff they were playing on the radio was no longer the sh** that I had been enjoying.” He began to dislike the philosophy of many modern rappers; “Listen to the last ten years of hip-hop and that whole sensibility of ‘I’m not an artist, I’m a businessman’ is there all the time, I’m a businessman too, but I’m an artist. I like being an artist.”

For a long time now, Saul has felt hip-hop’s direction drifting, and that there has been something intricate missing in many of the songs written in the nineties and early noughties. So naturally, Saul decided that it was his duty to help fix things. He says “I started writing songs pretty much just to create templates and examples of the type of sh** that I wished I could hear.” He continues, “I realised that there was really no real space for me to sit back and critique, if there was something that I felt was missing then I was going to have to provide that.” And the stuff that Saul wanted to hear happened to be very catchy.

Saul’s experimental style has allowed him to defy genre conventions and bend the boundaries of contemporary music. Soundspheremag asked the country-hopping creative (who currently resides in Paris) about his opinion on “mainstream” music. He says “If someone is capable of naturally writing pop songs that fit perfectly on the radio, I’m not gonna tell them that they shouldn’t do it, actually I might be a little jealous!” Saul freely admits that he doesn’t have “mainstream sensibilities” and that his career as an artist is more about learning; he realised early on that “the coolest thing I can be is a student”. Indeed, this studious streak not only influenced his musical abilities, but also his own personality. “It’s just been about finding the thing that matches my bio-rhythm and learning more about myself as I go, while at the same time learning about what other people have done and contributed, and wanting to make a worthwhile and original contribution.”

Saul’s desire for learning also permitted him to advance within his other chosen creative outlets, poetry and theatre. He’s always had “every intention of becoming an actor” and this theatrical impulse is very visible during his performances. He found that it separated him from other artists who specialised in music and poetry. “When I first started, most of the poets that I was meeting at that time were people who were reading poetry and approaching it simply” he continues, “my theatre background really fed my individuality in that world.” This also became clear in his acting career. Discussing the film ‘Slam’, Saul tells Soundspheremag about the challenges he faced when it came to creating the main character of Ray Joshua. He says that many people didn’t believe that people from the ghetto spoke like him. “I come from the ghetto so you can’t tell me that people don’t talk like this in the ghetto.” He continues, “Just because what is projected on screen looks like one thing, that doesn’t mean that there aren’t a million other things that aren’t projected at the same time in terms of meaning.”

This passion and energy for creating is clearly visible in most every aspect of Saul’s life, whether it is personal or professional. We asked him how he expresses this energy on stage and how he uses it to interact with an audience: “I feel that the greatest way I can connect with an audience is if I can find a way to connect with myself the way I do when I’m alone.” Saul feels that as long as an audience can see that he is truly involved with the music and enjoying every minute that they too can feel the same; “It’s not so much trying to give something to the audience, I’m really just trying to get free enough to lose myself in that moment because people can understand that.”

Saul takes a similar approach to writing, commenting that when it comes to creating songs, he works in the moment and doesn’t start with a pen and paper, but with his bass guitar. And within his poetry he says that “When it comes to writing that stuff, music is still present, but it’s usually me listening to other peoples’ music and having my moments of epiphany that connect with what I’m hearing, what I’m feeling, and what I’ve gone through over the course of the day.” Whether it’s in poetry or music Saul believes in true artistic fashion, “The meeting point is the expression itself.”

On Saul’s newest record, ‘Volcanic Sunlight’, there is expression a plenty. In contrast to his earlier records such as ‘The Inevitable Rise and Liberation of NiggyTardust!’, this latest offering appears to demonstrate an evolved and more positive Saul Williams. He says, “I didn’t need to do another angry album.” With new songs such as ‘New Day’ and ‘Dance’, Saul presents listening with an infectious buffet of delectable beats. “I was having so much fun because I knew that I was writing in a way that I never had” he says laughing. And it shows. With the opening title tune, Saul chose a different way of recording. He chose to freestyle his lyrics rather than just write them down; “I was just experimenting with what would happen if I didn’t write the lyrics beforehand, and that’s what that song is” he continues, “and I was comfortable doing that because the most important thing to me for that song were the horns and the drums, the poetry was in the music anyway.” 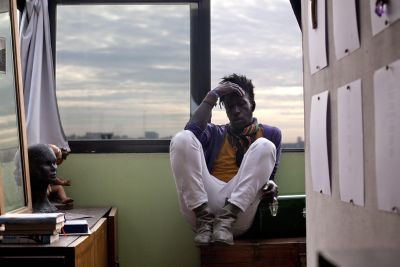 The style of promotion for ‘Volcanic Sunlight’ could not be more different from the release of ‘…Niggy Tardust’, as record executives talking of that last record “were so deeply invested in underestimating the intelligence of its audience that they were like ‘I love it, but I’m not certain regular people will love it’.” This led to the album (produced by Nine Inch Nails’ mainman Reznor) being put out as a free download, as both he and Williams knew that the audience would understand and enjoy the music. Following the release, Saul felt that he needed to move away from the political statements of ‘…Niggy…’, “After that record, I felt like, ‘Okay, I’ve said enough politically for people to know what’s important to me as far as that is concerned and now I think the most important thing I could do is actually share with people who I am.'”

Saul Williams has certainly evolved. From using his music to demonstrate his political interests, he now appears comfortable enough to allow his creativity to express his individuality wholeheartedly. His most recent album is a clear demonstration of that. “‘Volcanic Sunlight’ I guess, is almost like me matching myself with a volcano; there’s this passion inside that burns and yeah, maybe it can be dangerous if you approach it the wrong way, but from the right perspective and distance, I see the beauty in it.” This beauty is expressed in the purest of forms, through his poetry, writing and music. Saul is an artist without boundaries, allowing his creative juices to flow in any manner possible. His newest book lets other writers become involved with his creative processes. ‘Chorus’ is out in September, but unfortunately for us, it is only available in the US. It sees Saul collaborate with over seven thousand writers and poets around the world to create what he calls “a literary mixtape”; an exciting concept, taking the anthology to another level.

Saul is also working on a new film ‘Aujourd’hui‘, which comes out this Spring. Whatever happens next for Saul Williams, it is clear that he is an artist who is not only passionate about his work but can ensure that his fans are equally as enthusiastic, “I’m constantly searching for that sort of contrast or conflict that creates the fire to inspire me.”