What’s that? Jazz metal? Seriously?! Well, yes, and it’s f*cking awesome. If you have any doubts about this unlikely fusion, Norwegian band Shining will subtract them for you, especially with their latest album ‘One One One’. We spoke to frontman Jørgen Munkeby about the new LP, touring the UK, and his changes over the years, and the man certainly has a few points to make. Later, the conversation took an unexpected turn for the philosophical. 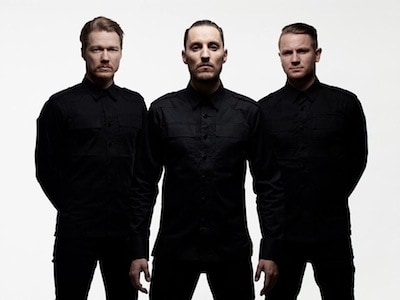 What was the creative process behind the hurricane that is ‘One One One’ we wonder? “Every time we’ve made an album I’ve decided to go for whatever I wanna do at that moment,’ Munkeby explains. “After two acoustic jazz albums we found we’d spent enough time doing that, and I personally felt like it wasn’t the music of our generation. The structure of the songs is now very organised. We have verses, choruses, all that stuff, and they aren’t too long.’ Munkeby is adamant that trust is vital, and hell, how can anyone disagree? He made a point of that when talking about the co-producer of the album (Nine Inch Nails and Marilyn Manson’s long-time collaborator Sean Beavan). “The communication was great. He was pretty quick at understanding what we were after, but it was still new to him and me. We were both conscious about what we were doing. Trust is hard, but with him it wasn’t. People can be childish when it comes to their ideas, but he’s great because he doesn’t let his ego get in the way. I hope we’ll get to work with each other again.”

The trust has certainly paid off. The intense album is being well received so far, and simultaneously, is out and out rejected by others: “People seem to find the album interesting, and they love it, but it’s a bit much for some people because it’s pretty far out there. I never think about what might sell, I just try to trust my taste, even though it would be great selling a bunch of albums and becoming really rich and all that.” There’s a lot to be said for niches! The majority will often recoil and turn it off after hearing it for five seconds, but those who dig it will do so passionately.

So which track from the new record does Jørgen love the most, then? “When it’s time to write a new album I always have one or two favourite songs from the previous album, and I want to beat them, and with this one I have more favourites than ever. I love ‘The One Inside’ and ‘My Dying Drive’, those are my next choices for making a video. ‘Black Jazz Rebels’ is another of my favourites, and I’m starting to like ‘How Your Story Ends’ more and more.” Monster tracks like these don’t come together easy, either, and inspiration can be found in the most unexpected corners, as Munkeby explains: “I’d just got back from my local grocery store – I bought orange juice, sparkling water and ‘Prometheus’. I was in my studio working on ‘I Won’t Forget’, I had the drumbeat, the bass line and all sorts of ideas for vocals and stuff, and it had this weird happy vibe that we weren’t able to get rid of, and I wasn’t sure why. So I watched ‘Prometheus’ and the opening left such an impression that it gave me the idea for the whole vibe of the song, and I went back and rewrote it and took it from there.” So sitting down and relaxing really can make you productive. Remember that next time you’re stuck on something. Maybe these words will write themselves if a break is taken…

Speaking of inspiration, we ask how this LP is different to previous efforts. “I haven’t changed through the music, the music has changed through me,” he says enigmatically. “When writing ‘Black Jazz’, I’d been through some of the worst years of my life. Now my life is better and more fun, and you can hear that in the music. If you’re being yourself, the music should reflect you as a person and I think it does.”

Munkeby clearly is a very hard-worker to the point where we started to wonder, is music the only thing he has time for? “When I was younger I considered becoming a professional fighter,” he comments nostalgically. “Fighting was one of my biggest loves. Now I don’t have time to do much other than work.” As well as reminiscing the times where he could indulge in other passions, he also remembers a more reckless time. “I grew up with a skateboarding gang so we hung out and drank and all that sh*t, but soon after my focus was finishing school and practicing and that’s it. So I’ve missed out on quite a bit. I hope in the future I have time for a hobby.”

At this point in our interview, things get a bit deep: “If you ask if I’m happy right now I would say no. I’m stressed and my back hurts. But when I look back on the stuff I’ve done I’m happy about that, and I’m happy about the things for the future. That’s how I am. For me it’s more important to be happy and to be proud about my life when I take a step back. Other people might not care about that, they care more about being happy right now.”

Lastly, as we are so excited about this band and their unique genre, we simply had to know whether they are planning on coming to the UK again. “We’re booking a Europe tour at the moment for October/November, so there will be a bunch of UK dates there. The UK is one of the biggest markets, and it’s an important place to be just like the US. There’s a lot of interest there. The people who are the best at their stuff go to LA, New York, or London [unless you’re us…in Yorkshire – ed]. That’s the thing that I love about the UK. You’re a cultural sector.”

With much touring, writing and, err, building, planned for the future, it looks as though we can expect a lot more action from Shining. “The rest of the year is pretty full. Right now I’m writing some music for saxophone and string ensemble, then we’re coming back to the US at the beginning of 2014. Then I’ll probably get that familiar feeling that I want to write more music.”

Fantastic. But considering the realistic and sage attitude of Munkeby, it would be a short sell not to include some realism and sage. “The studio I’m in right now [for the interview] is actually my studio, this is where we recorded a lot of the album. But they wanna tear it down and make apartments. So that’s also a new project – building a new studio.”

Damn. Well, as we discovered, being happy in the future is just as valuable as instant gratification, so we can only wish the band luck with all of this.