When Sleepwave played the UK recently, Spencer Chamberlain made time to speak to Soundsphere about the transition to this newer, more melodic band from his post-hardcore roots in Underoath. 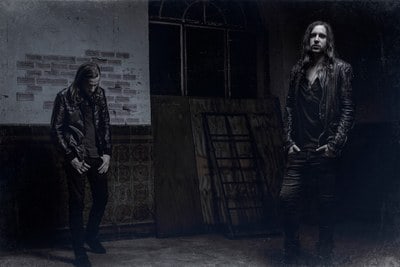 S] How was Wembley with Bring Me The Horizon?

Spencer] “It was killer, man. The crowd was really good.”

S] When are you guys coming up North?

Spencer] “We’re trying to tour all the time. It’s a matter of getting on tour and staying on tour. Being a new band it’s really hard to afford to tour, especially the American bands coming over here. We lost a shit load of money just coming to play these shows. We’re not eating, our cell phones are getting shut off because we love playing music.”

S] How do you feel Sleepwave is challenging you in new ways as a musician?

Spencer] “It’s definitely completely different. It’s more based around songwriting, melody and structure. So it’s challenging to make a song interesting, cool and not cheesy. Writing dark songs that aren’t just like riff after riff after riff is a lot tougher.”

S] You’ve got some dark songs but they’re also quite uplifting in terms of tone and pace. Was that your intention?

Spencer] “I just wanted to write something that I wanted to hear. You can tell it’s all from my personality. The stuff I was writing with Underoath, it’s still me, it’s just a different side of me. I feel like I have always had that in Underoath and Sleepwave. It’s uplifting but dark, deep and heavy at the same time.”

S] Is there a track on ‘Broken Compass’ that defines you and where you’re at now as a musician?

Spencer] “It’s the whole album to me. There’s still a handful of songs that aren’t on that record that are just as good as the ones on there. It’s just for this record I wanted this song on there, that song on there and that song on there so I picked the ones that sit best with those to make a good album. I didn’t want six sounding like ‘The Wolf’ or ‘Inner Body Revolt’. You only need one of those per album. ‘Hold Up My Head’ and ‘Broken Compass’ have a similar feel for the middle of the record, the end of the record. It’s filled out for sure and I think it’s the whole record for me is where I’m at.”

S] What can we expect from Sleepwave in the future?

Spencer] “We’re going to be touring as much as we can. Offers come and go and tours fall through sometimes. We’ve had many tours that we were on when all of a sudden the tour gets cancelled or moved to a different date and we already have something on that date. But we’re trying really hard to stay busy, make the best of 2015 and stay on tour the whole year. You know, coming back places like the UK and we’re hitting Australia for the first time.”

Spencer] “I love nature, you know like mountains, forests, cliffs, oceans and all that. But also architecture. I didn’t really notice that it was something I was really into but then my girlfriend pointed out that I’m always talking about the way a building looks and how exciting that is, so I guess that inspires me too.”

S] Are there any specific experiences that inspired ‘Broken Compass’?

Spencer] “That’s just the last two years of my life, basically. From the falling out of Underoath, to the break up, through the depression and struggles. Then regaining the strength to stand on your own two feet and overcome all those hurdles that my life had thrown in my face.”

S] When was that moment when it all clicked into place with Sleepwave?

Spencer] “Well. we were certainly hearing things back in the studio, which was just kind of like “dude, this is insane.” It was awesome to feel that. With the first song that was down with like a rough mix it was like “wow, this is going to be killer.”

S] Going back to your starting as a musician, how do you feel you have changed?

Spencer] “When Underoath started we weren’t even old enough to drink yet. You learn so much from your mistakes that I can’t even imagine where my life was at when we started. I was a young boy that had no idea what I was doing and we made a record that connected. Then we weren’t happy with that record as much, so we changed our style a little bit and worked really hard on ‘Define the Great Line’. We learned a lot as we had success and people started changing. When you first start as a band you’re a bunch of kids that have the same ideas, the same ideals and the same beliefs. Then you grow into men and spend 11 years together. You’re bound to grow apart as those ideas and ideals change. I learned a lot about life and even more so about being a musician. Every time something didn’t go our way I took note of it. Some of the guys would take offence and I would learn. Then you learn how the industry works and how, whether you like it or not, you need to learn how to interact and make things work out with them. There are not enough words from the start of Underoath to where I am at now.”

S] You talked about the down time between Underoath and Sleepwave. How did you come through the depression?

Spencer] “It all led up to getting into the studio. It was just like “if I could just get this album recorded and off my chest,” that was like the light at the end of the tunnel for me. When that happened it was a huge weight lifted off my shoulders. When the record was done we still had like six months before it came out so the next tunnel I had to exit was the one of just getting it out there. It’s very appealing to be able to be heard. Now I’m in another tunnel of where the end is “how can I get people to listen to this album?” That’s by touring. How can I get out there, play all these countries I’ve been to over the last 11 years to play this record? That’s the next tunnel that I’m crawling through and I think I’ll never find that complete content. I feel like the hardest part was over but I might say that it gets harder. The minute you think everything is fine it’s like we’re still broke. Playing Wembley Arena in front of that many people but not being able to buy a drink after the show to celebrate. The opportunities are there but we’re not in the place. We’re not concerned with money but if we could just make enough to pay our bills so we can stay on the road, that’s our goal. Once we hit that goal we want to be a headlining band or we want to sell out venues. Then we want to take over the world.”

S] What inspired ‘Inner Body Revolt’ and ‘The Wolf’?

Spencer] “I don’t like to go into too much detail because I would hate to cheapen the value of what someone else interprets. That’s what music is, you interpret it the way you want, you make it adapt to your life and that’s why you can relate to it. But yeah, those songs, that’s real. ‘The Wolf’ is a situation where you’re as heated as possible and you’re walking away. With Inner Body Revolt it’s the frustration with a peer or a family member. In this situation it was a peer of mine. However many times I lended my hand out to help this individual, they didn’t return the favour when I needed it. That’s ‘Inner Body Revolt’.”

S] If you could come up with a Frankenstein’s monster for the Sleepwave sound, what would you pick and why?

Spencer] “I hear the backbone of Nirvana, like as far as the attitude, the whole reason for a band to exist and the anarchy of what that band did for rock and roll. The legs of Nine Inch Nails, with the electronic sounds. The arms of Deftones with the melody, the darkness and some of the chord progressions they would use. The hands of the band I’d use is as far off the table as like Muse or Radiohead, something that has that artistic side to it. I guess there’s Underoath at the feet because that’s where I started from. The head, the eyes and the brain is just me. Something completely new. The head and the brain are the everything that I hate about music, that I’m not hearing. Everything that I don’t like is what inspires me to write music that I do like.”