Here, Dan Shields chats to The Pretty Reckless (Ben Phillips – guitar and Taylor Momsen – vocals, Mark Damon – bass and Jamie Perkins on drums) in London regarding their new record, and influences. Dan notes too, that Ben opens with a really good fake English accent, this needs to be said. It’s very good. There would have been a photo of it happening, but Dan got his camera stolen. So, that sucks. The interview’s good though… 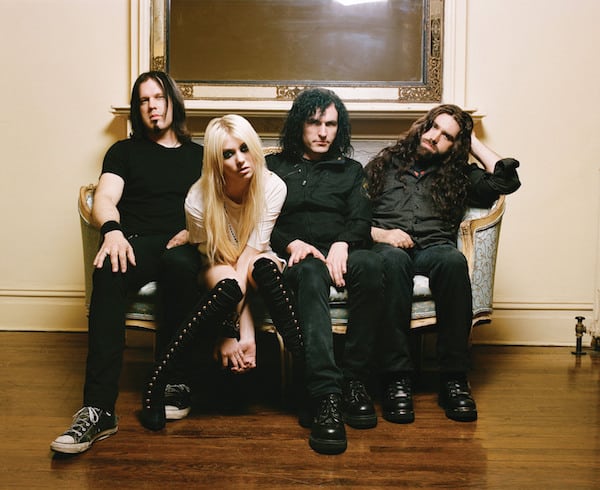 S] What are the overall themes for the new record, “Who You Selling For?”, were you in a particular mindset when you went into the studio?

B] The mindset was: we have songs. They’re ready and we’re going to play them honestly. The themes of the record are just now becoming clear to us as we look back on it, which we have barely had time to do. It definitely has an overall feel to it that is honest to who we are and is very in-depth.

T] It is very much a record that is meant to be listened to from front to back and it will hopefully take the listener on some sort of journey.

B] You take a little of Pink Floyd, a little of The Beatles, Some AC/DC, a little Led Zeppelin, a little Metallica, A little of The Who, some Soundgarden. You put it all together and then you have us play it. Then you’ve got… the first half of the record.

T] You’ve got the first song!

Can you take us through the songwriting process? How does that work?

T] Ben and I write the songs. There isn’t exactly a process at all. It’s an anti-process. The only consistent thing is that we both tend to write in seclusion. It means that we time to process and think and to go down whatever rabbit hole your brain is going to take you down that day. I think keeping yourself open to any idea, not knowing where that idea’s going to come from.

B] Really adhering to inspiration is the key. Instead of trying to workhorse it, so the music really has uniqueness and quality to it. There is no process to that. That’s what makes creating hard.

Lyrically, do you write songs from a personal place or is there a more authorial ‘storytelling’ approach?

T] Both. Definitely both.

B] Depends on the song and the idea.

T] and the lyric itself: one lyric might be directly out of my journal, and at the same time, it’s an entire metaphor for something else completely.

B] If you listen to the songs deeply, you can figure out where those different elements do appear.

Outside of the music, what kinds of things inspire you?

T] People, Places, life experiences, our experiences: anything and everything is inspiration, which is what makes writing so torturous. Inspiration can literally come from anywhere.

B] Each place has its own influence. The songs that were written in New York City have their own vibe.

Do you listen to music in the studio before you record to get yourself in the right headspace?

B] We do, we do. I have a ritual. I like going through The Beatles demos with everybody in the room, so we get to hear the speakers and how they sound. We’re all very familiar with the recordings so that helps us understand the sound in the room.

T] We get in the studio, we listen to all our favourite records, adjust our ears to it.

B] Then we go, ‘This is what we wish we were!’ that process can take days…

B: No, listening to records is always a blast, there’s no ‘work’ about it. Sitting in a recording studio with some $10 000 speakers, you say “I’m gonna play some Beatles on this shit”. It’s awesome.

You’ve talked about the first half of “Who You Selling For”, but what about the later tracks? There’s a definite blues influence there.

M] The blues is the basis of all great rock and roll.

B] I think at the core, that’s who we really are as a band, so if it’s showing more, then it means that we’re taking away things that hid that.

T] I think it’s more that we’ve grown. I think with this record, we interpret the sound better than we have before. It’s a gradual process.

B] Getting your shit down onto record is complicated.

B] Unless you’re David Gilmour. Or Eric Clapton. Or Paul McCartney. Or John Lennon.

Looking back to the success of “Light Me Up”, how do you feel about that era now? What’s changed?

M] We’ve been a band for years now. We’ve grown together as a unit.

B] I feel like “Light Me Up” was us coming into our own as musicians, as songwriters. Even though Taylor was clearly much younger, we were all in the same place artistically. I like the songs on that record. I think they’re all solid.

T] Aside from the fact that I was fifteen. I sounded like a child. My voice is really, really high. We did all meet at a really kismet time though and that is super rare in life. The fact that we’re all still here now means that something good happened.

M] To find people you connect with musically as well as personally, that just doesn’t happen. But apparently it did here.

Looking forward to the end of this year and the start of the new one, what plans do you have?