Tonight Alive are an Australian born, dynamic-as-hell pop-punk outfit with some self proclaimed (and Soundsphere supported…) “bad-ass chops.”  They’ll be taking the stage alongside Black Veil Brides, Chiodos and Fearless Vampire Killers in February next year. We caught up with guitarist Whakaio Taahi in the midst of touring America with Pierce The Veil and Sleeping With Sirens to find out how it’s all going. 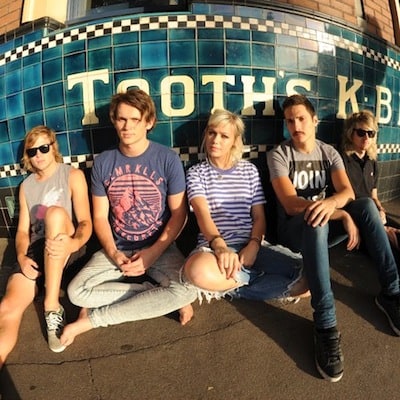 “People will always compare us to other bands, but it doesn’t affect us”

S] It’s possible (and of course shocking!) that our readership might not have heard about you, can you woo them with your back story in two or three punchy sentences?

W] “Cam [Adler, bass] and Jake [Hardy, guitar] were originally in an awesome pop punk cover band, when I met them in Year 11. After I joined, we parted ways with our drummer in 2008. I’ve known Matt [Best], our current drummer for about eight or nine years as we played in a rap band in year 7 and 8 at school; he heard we needed a drummer and jumped on board. Jenna [McDougall, vocals] came around in June 2009 and it all just seemed to fit perfectly!”

S] You’ve just finished your first headline tour in the UK – did you have fun?

W] “Oh yeah!! It was awesome to get back to the UK and even better to headline there! There is something so amazing about the energy of a live show especially our sold out London show – I can’t remember having so much fun playing live before!”

S] Do you notice a difference between the European fans to those back at home in Australia?

W] “Well, besides the accents I don’t think there is too much of a difference with our fans. Obviously we have established ourselves a bit more in Australia, but the UK is definitely catching up! We love playing in the UK, it feels like home except for the horrible weather!”

S] You’ve just stepped across the water to the States to tour with Pierce the Veil and Sleeping with Sirens, how is that going?

W] “This is honestly one of the ‘funnest’ tours we have been on. Every night is sold out and you can’t ask anymore from a tour. Everyone loves hanging out and going to bars every night. Although, I don’t think my liver is going to thank me after this tour. I’m probably going to have to go home to detox!”

S] Do you share a tour bus with those guys?

W] “Nope, we have our own bandwagon which is kinda the same as a bus but without the back lounge and only 9 bunks – but we have made it our home and everyone ends up on it anyway.”

S] What music and movies have been the finds on tour so far?

W] “We just recently saw the new 007 movie and I was blown away by it. I think it is definitely one of my favourite Bond movies (big call I know). We recently got given the new Parkway Drive and that has been playing a lot in the bus. I play a lot of Steel Panther as well – especially before we go out, to get in the mood!”

S] That’s some heavy duty touring right there – any chance to rest or play?

W] “No rest!! We have been trying to finish writing the new album on the road and we’re getting very close. We head home after this to head straight into the studio for a bit of pre-production and hopefully start tracking in January. Then we head to the UK again for the tour in February. We love what we do though, so it’s all very exciting for us.”

S] You worked with the mighty Mark Trombino (Blink 182, Jimmy Eat World, The Starting Line) to produce your rather awesome debut full-length album ‘What Are You Scared Of?’ How was that as a process? Was it all easy sailing or did it have its challenges?

W] “It was different and challenging but amazing. I don’t think we were expecting how much of a challenge it would be but we came out a million times better as musicians. It was so worth it to get the result we got and I will never forget that experience.”

S] If you had your choice of anyone to work (collaborations or production) with for the next album, who would it be?

W] “I would love to work with Dustin [Kensrue] from Thrice just because I’m a massive Thrice fan. It would be a dream come true for me.”

S] Are there any surprises in store for us?

S] In this male-dominated rock industry, you’ve got Jenna, a ‘firecracker’ female frontwoman and a band that rocks that high-voltage power-pop-rock sound – undoubtedly that’ll result in more than a few Paramore comparisons, how do you refute these?

W] “People are going to compare, it’s human nature but we don’t really let it affect us. We just do what we love to do and hope people like it.”

W] “I think we are going to try and put on our biggest show yet. I know we aren’t headlining but these are going to be some pretty massive venues and we are really excited to run around and do what we do best!”

W] “We hug each other every show before we go on.”

S] What’s the strangest place you’ve ever heard one of your own songs?

W] “In a Hot Topic store in middle America somewhere.”

S] What is your one tour item that you’d never leave at home?

W] “My laptop. I record all my demos on it and if I lost it I probably would fly home and quit the band!”