In our latest interview, we talk to musical veteran Greg Roberts, drummer and founding member of Dreadzone, just as the band go in to their 20th anniversary year. 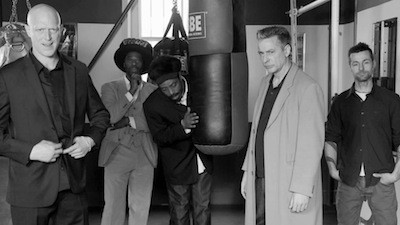 “We change it up all the time!”

Dreadzone are an alternative band with a very unique sound. They incorporate dub, reggae, techno, folk and rock in to their style – very successfully we might add. We’re backstage with Greg and the band in York, who although have been doing some extensive travelling, look ready and up for the show. The drummer talks to us about his musical past, his time with Big Audio Dynamite, musicians he has worked with, the roots and development of Dreadzone, and plans for the future as we move further in to 2013.

We start off by going right back to roots of the band when first formed in 1993. Greg talks to us about the origins of the band name, as well as briefly reflecting on previous bands (we told you he was a veteran), “Don Letts came up with the name [Dreadzone]. We were in Big Audio Dynamite with Don in the 80s – we did a reformation tour in 2011 actually – and when we had a band between Big Audio Dynamite and Dreadzone, called Screaming Target, we we’re looking for names for the album. There was a bunch of names written down in a book and I saw that when we we’re starting Dreadzone and thought ‘that’s a good name’, and we just stuck with it really.”

We talk a little about the creative style the artists had in the early days, “It was much more linear; stripped down. There were lots of samples, a lot more rave stuff, and longer tunes.” Greg compares how this style has changed over the years, “As we’ve gone on we’ve written more and more songs, we’ve had more and more stuff to write about – relationships and stuff like that – and you know, we’re expressing ourselves in song: good old fashioned song-writing”. He concludes, “We’re influenced by a lot of things but we’ve got a lot less linear over the years.”

Seen as the drummer touched on the subject, we thought we’d find out exactly what else influences Dreadzone. Having such a unique sound, we wondered whether there were any specific bands that have had an effect, “I don’t know what bands in particular, I mean I grew up listening to The Who, The Beatles and Led Zeppelin, and then I discovered funk and reggae and hip-hop.”  He adds, “Being in a band like BAD [Big Audio Dynamite]; you had rock-n-roll guitars, reggae bass and samples; that whole eclecticism has gone in to Dreadzone.” Upon another mention of BAD, Greg reflects on his long spanning career with Leo Williams, Dreadzone bassist, “Me and Leo have been playing as a rhythm section now for 28 years – that’s something that’s at the core of the band. It’s something special.”

Now we’ve spoken to Greg about the roots and early days of the band, we thought we best move a little closer to recent times. Greg reflects on 2012 and how that went, “We did a tour earlier last year to promote second light, which was a re-issue of the album that came out in 1995 with Virgin Records,” he adds, “we had a section that was devoted to second light with a couple of instrumentals in there”. He tells us a little about how they go about planning their live performances, “We just change it up all the time, it’s the same with this tour – we’ve moved the set around, you’ve got to keep it fresh.” The drummer reflects on some of the hardships of re-visiting old songs, “One of the difficult things about doing it is going back and finding all the old bits and pieces for the songs, they weren’t really recorded on to floppy disks and hard drives, so piecing them back together is quite a task.”

Greg talks to us about his most recent tour, “The tour’s been great. We’ve tested a couple of new songs and played the old favourites which people like to hear.” He remarks, when we asked him how he found the crowd here in York, “Good, really up for it!”

Now we’ve talked about the past and the present, we decided to focus on the future. Greg tells us a little about the new album, which is still in the works, “The new album’s coming out this year, it’s going to be called ‘Escapades’, so when we go on tour in the spring, we’ll have about three of four songs off it in the set – this album’s going to be our seventh studio album. We’ve got our own label now [Dubwiser Records], we’ve got distribution and a fan-base.” We asked the drummer if he could reveal to us when to expect to hear ‘Escapades’, “When it’s all mastered – I mean we’ve got a couple of samples to clear – I’d say the spring. We’ve got tour dates booked now for March, April and May now so… any-time round there. It’s the 20th anniversary, we’ve got seven studio albums down, so we’re going to be on tour and play as many festivals as possible!”