After nine turbulent years at the forefront of the UK gothic scene, the Screaming Banshee Aircrew played their last ever show at DV8 Festival in July. Having ended on a high note and with individual new projects on the horizon, Soundsphere sat down with the Aircrew exclusively for one last time to discuss the band’s impact upon their home city of York and its diverse underground culture. 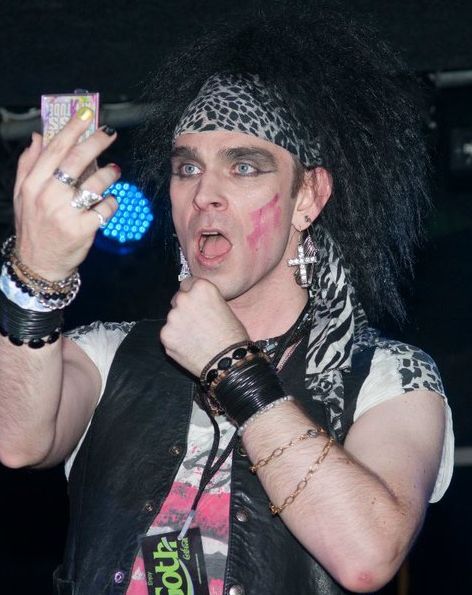 “We wanted to reach as many people as possible” – Jo Violet

S] Is there any material that hasn’t been released that might be coming out in the future?

S] What led up to the disbanding?

CB] It’s all my fault! I initiated it all really. I want to be free to do other things. The Banshee Aircrew took up a lot of my time – not that this was a bad thing but I wanted to move on.

JV] It’s difficult to be in a band where even rehearsing requires lots of travelling. I mean, I still would have carried on but the benefit of that is having more time for other projects including my business Music Non Stop, unfortunately though, I think that might swallow all of my time. 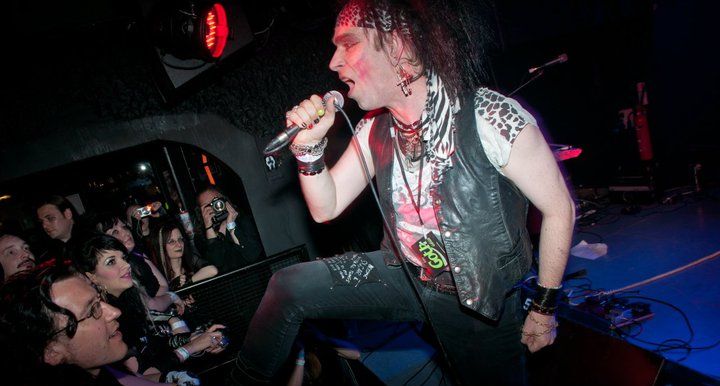 S] What have been some of the defining moments for the SBA?

NU] Definitely the recording of our last album, ‘Sugar’ getting the songs together with a really good producer – that was an achievement and a half.

ME] I think that my defining moment would have to be supporting The March Violets – that’s something that I thought I would never do.

CB] It’s not really a defining moment but everything we have done seems to have been a first for us all – we got signed and then recorded three albums – I don’t think many local bands nowadays can say that – the last one is the best one which is nice. Everything that’s happened while I have been in the Banshee Aircrew has been a first for me.

JM] In terms of the goth genre we reached the top of the rollercoaster and that was great but then we started on a whole new ride after that.

S] How would you like to be remembered as a band?

CB] I think for people to remember that we were really good live.

ME] A lot of the difficulties we have had came when we changed line-ups and as we got better and better. People still want us to do jokes, and while we do still do on occasion, we have improved so much and that’s important – I’d rather have evolved in our nine years rather than have spent that time doing the same music over and over again.

JV] I want us to be remembered for ‘Sugar’ rather than any of our other albums.

ME] The only ‘dud’ album for me was ‘When All Is Said And Done’ because that wasn’t the best we could’ve done. The songs were good but it was the execution of them that was lacking. Even looking back at our first album, ‘Titanic Verses’ at that time we were naïve but in that period it was the best that we could do, and I was listening to it again the other day and I think that they are still damn good songs.

NU] Definitely the recording process for ‘Sugar’, also performing all of our tunes live and of course, all of the songs that would’ve been the album we made next! [All laugh] 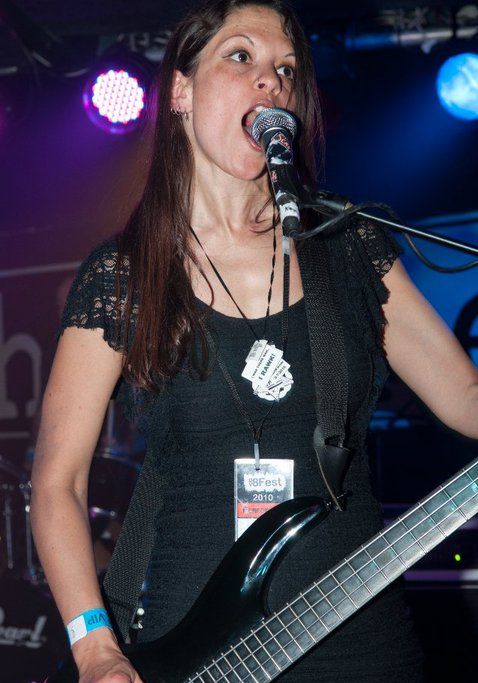 ME] Yes…all songs that nobody will ever hear unless there is a wealthy benefactor who will give us £3,000 to record them. Actually, it’ll be nearer £5,000 which is closer to how much it cost to record our last album! [Laughs] It costs money to make good music. Even today, you can use a laptop and some people can do that, but generally speaking it takes good producers and a good space to do a proper job. People will always say that you can do it in your bedroom – you can’t. You will get second rate material from that usually, unless the guy’s a genius. Unfortunately, if you want to do it the proper way it is £5,000 an album, and that’s on the cheap! We tried to do it the proper way and that’s why after all this time, we are still skint.

S] What kind of advice would you offer to band’s coming out in the future within that gothic niche, that might want to follow your lead?

NU] Be yourself. Be something that is different.

ME] People want their bands to be relevant to the ‘real world’ – people say, ‘oh, we are waiting for the next goth revival’ but that won’t happen if people within the scene are constantly producing rubbish. If a musician listens to the same thing over and over again for influence, the standard of it just goes down until it’s terrible. To me, that is where the gothic scene is now in the UK, but not in Europe, which is why they are producing good music over there. It’s the same with live performances also, people get so used to seeing the same type of poor performance in this genre that is becomes acceptable to have two people and a backing tape which features a 16-piece orchestra, in no other scene would that be acceptable. Outside of the goth scene, it’s a joke and I used to think that’s because people don’t realise how wonderful it really is, but I went out there and I soon realised that’s how we are perceived, as a joke band. Why not do live music with guitars and drums – it’s fun and it’s lively and makes people stop looking at their shoes! It’s all about entertaining audiences and people don’t always like to hear that, strangely enough.

CB] There are no excuses. If you are in a band then you are going to make mistakes, it’s inevitable. You can’t blame other people for those mistakes – a lot of bands are good at finding someone else to blame and at the end of the day, you are the guys on stage – it hurts sometimes when you’vevdone a bad gig, but you need to always ask, ‘why was the sound bad?’ and ‘why was the lighting not working the way we wanted it to?’ – it’s down to the band to prepare and sort these things out and look at themselves to ask what is wrong.

ME] You are never going to move forward if you only do a live gig every six months – don’t get annoyed if you’re not getting included in festivals or line-ups if you only gig once every few months and don’t do anything in between. As far as the fans are concerned as well, they need to go out there and see band’s that are not in the goth scene.

JV] Don’t give into mediocrity because there is a fair amount of mediocrity in this scene. Also, when we decided to try and play gigs outside the scene, a lot of people took that as us turning our backs on it – we weren’t, we were trying to make the same music and take it out to other people because we thought that they would like it and we got a lot of bad feedback for that. We just wanted to reach out to as many people as possible. We didn’t change what we were making because we’ve always made the music that we wanted. So, don’t just play goth gigs because it’s likely that some people will like it even if they haven’t heard of the goth scene.

S] Why did you make the decision to get a live drummer after so long with a backing track?

JV] You can’t be taken seriously outside of the gothic scene if you have a backing track and, at that point we didn’t think that we would be alienating people.

CB] With a backing track it’s all the same, whereas with a live band you can do stuff and it’s much more fun to play live.

ME] It increases creativity because there are so many accidents that can happen and accidents are good!

ME] It comes from me going out and seeing other bands, just thinking, ‘we need to get our act together’ and so we did, and now we can hold our heads up high with any band from any genre.

S] Can you explain why you think you started of as a joke band?

ME] We started of as a joke band, with the name and everything – we thought it was going to be one. We did Rocky Horror covers at our first gig…

S] In that jokey spirit then, what’s one of the SBA’s most fun gig stories?

CB] A fairly recent one which had me running around Camden in London before playing a show at the Electric Ballroom trying to find our then drummer because he’d had a paddy and didn’t want to play in the band anymore, everyone else was left on stage scratching their heads.

S] Are there any bands on the scene at the moment that you think are worth checking out in your absence?

JV] Yes, they are by far the best band on the scene at the moment. They are everywhere – you can’t pigeonhole them.

ME] They make me scared everytime we go on before them, and they are doing everything that a goth-centric band should be doing and giving us a run for our money. I just hope that they succeed where we failed. Goth bands need to get it together – there’s this apathy all around it and people saying, ‘oh, we can’t do this because it’s the UK goth scene’ – Luxury Stranger are showing people how it’s done.

S] What would you like to say to your fans and everyone who has supported you?

JV] Thank you to everyone who bought our albums, to the DJs that played our stuff and to those who wrote about us – it’s very much appreciated and we wouldn’t be anywhere without you.

S] Is there a consistent theme throughout all of the SBA material from start to finish?

JV] It all comes from the weird and wonderful contents of Ed’s head.

S] If you could sit in the Black Swan pub where we are now and have a special dinner celebrating the history of the SBA, who would you choose to eat with and why?

ME] I’d pick Jo. I would pick Xris but he’s my brother and I live with him so… I’ll pick Jo because she’s the closest thing I have to a sister and she will be the one that I miss the most.

CB] Well, since we are celebrating us, then it could only be a meal for ourselves.

NU] I think that’s because only we know what we have been through.

ME] It was always us against the world and it always will be.

CB] Then again, if we could have Luxury Stranger sitting on a table in the corner then we would and then The Last Dance in another!

NU] We have the in-jokes that nobody else understands too!

ME] And, we all put up with each other.

On that note, Soundsphere leaves the quartet resplendent in their gothic finery, fondly reminiscing about the last nine years over a pint.

For more information visit the official MySpace and LiveJournal.