ANTIPRODUCT are a complete amalgamation of all that is weird and wonderful about the contemporary music scene, loud, diverse and colourful, their music takes you on a journey which will have you bungee jumping, having sex and eating food all at the same time. The have shared the stage with the biggest names in rock including The Damned, Marky Ramone (The Ramones) and Sigue Sigue Sputnik. 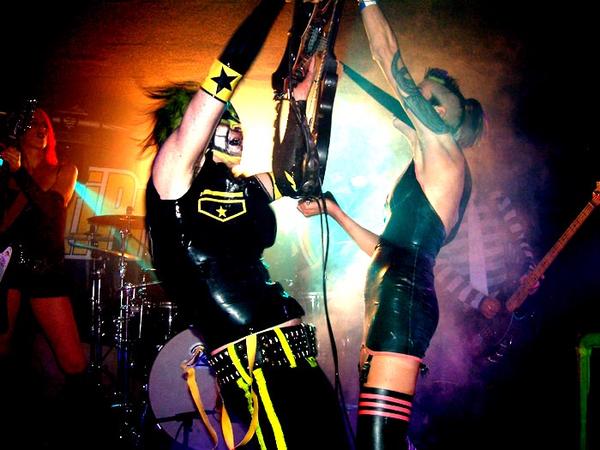 Their enigmatic front man Alex Kane was born and raised in Chicago where he had success in the band Life, Sex and Death and much later when he came to the UK he formed pop-metal bands Clam Abuse in 1999 and AntiProduct in 2000. He loves playing in the North of England with AP because they can relate to the people.“

Apart from being welcomed and accepted with such unflagging consistency, the best thing about the North is that it is not the South,” says Kane. “Take it from me, the South of England is filled with rude, selfish back stabbing morons. It’s Los Angeles, without the tan.”

“I dig Northerners. You see, I’m from the Mid West and we’re the same. We love to work hard for things we love and don’t give too much of a shit about what people think. That’s why I think our most loyal fan-base comes from the North.”
Kane mentions that his love for performing is driven by the close bond he’s forged with the rest of the band. In fact his best friend is Clare Product, the groups wild guitarist. The pair have become close after years on the road together pulling equally crazy stunts on stage.

“Sometimes, when I do my more stupid ideas (like the getting nailed to a cross for a Christmas magazine shoot) or never sleeping and always working she’ll say ‘You’re going to get sick if you keep going this hard’ or ‘Hey, are you sure you want to deliberately try to knock yourself unconscious at every show?’ that’s when I hog tie her and thank her for her concern.”

Kane says that when he’s not being inspired by his best friend, he’s influenced by a variety of emotions. But he doesn’t have suicidal tendencies anymore. The bands big selling single, Better Than This is a cathartic attempt to banish ‘the black dogs’:
“Around that time I was having dreams of suicide, again one of my weirdest ones, but then characteristically, I thought to myself: ‘Hey, it’s going to get better than this. Then I got pissed and fought back with music, as I do.’
The group have spent years crafting finely-tuned pop rock which has in turn gifted them a reputation for unpredictability. When performing they mix action with a fun attitude which is translated within such songs as Drugs, Sex, Food and Booze and their popular cover of the Beach Boys Good Vibrations. Kane says that AntiProduct feed off interaction with the crowd.

“Kids in working class towns like Huddersfield have got enough problems without some millionaire idiot pretending to empathise with their condition. They listen to rock ‘n’ roll to feel better and to escape their stress.”
Kane thinks many people take music far too seriously nowadays. He thinks it is far too one dimensional and he’s left in no doubt who is to blame:

“Public schools have made too many English guys unsure of their sexuality. They feel they’ve got to listen to macho music so they’re not accused of being gay. There’s no place for glam rock anymore, he adds:

“Freddie Mercury, David Bowie and Iggy Pop changed the way we see music today. They were promiscuous, fun loving and most of all they played for the people. They loved men, women and make-up and they didn’t hide anything, That’s what we’re all about. We’re bringing the laughs back with blood, glitter and a ton of UV paint.”

The band are currently working on a untitled album (with acclaimed producer Sylvia Massy) in the US which is scheduled for release at the end of the year. AntiProduct will tour the UK again next year.