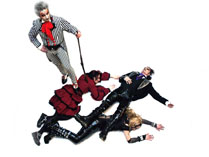 Uninvited Guest are a weird and satisfying concoction of Gothic and glam rock imagery backed by a truckload of guitar driven Industrial and electro tinged pop music which is geared to make your ears sing before they bleed, members of the band now hail from all over the North. Keyboardist Lucas stops in to chat to SPHERE.

“In the beginning UG was formed in Stoke, but now several years down the line with new members, we are kinda dotted around the country. Dean still resides in Stoke, but I moved up to York almost four years ago now. Jane is in Preston, And our newest guy, Ricky, is based in Birmingham.”

Having released their debut album Malice In Wonderland in Europe through their label Maddening Media, UG have been on a role recently. They have always been outgoing and provocative and their songs are designed to enchant and evoke in equal measure. Their song Join The Dance is inspired by the Goth gathering in Whitby every year, while Angel Boy represents the band’s own unique characteristics but it also is open to interpretation: “That song is an imaginary character partly based on Dean and myself, but to whom many a Goth boy can probably relate. I wouldn’t go as far to say he was designed to be the representative face of Goth culture, but he’s certainly an amalgamation of our ideals and experiences which myself and Dean as the founder members of the band both relate and aspire to.”

Lucas says that the bands German label has been instrumental in pushing for the bands success in terms of promotion, he says that they are lucky to have found a group who lets them have a great degree of creative control: “They work with several distributors, promoters, who collectively have really pushed the release. Through their networks and advertising we’ve been lucky enough to receive a fair amount of exposure in Europe, which has been just great for us, as for developing our ideas, this is still left with us really, as Maddening Media are all about artistic freedom.”

In terms of image UG are a melting pot of sexualities and as a result they appeal to a multitude of audiences that other styles may unintentionally shut out. Their world of fantasy inspired by glam rock and ambiguity brings together gay, transgender, straight and international fans.

Lucas says that though the Uninvited Guest visual element is equally as important as the music, the band doesn’t agree with the fact that just because there is a focus on image, bands who have been given the Goth tag can be pigeonholed as lesser musicians because of it:

“It’s a really difficult thing for a lot of people to grasp, because there is always this expectation that bands lacking visually must be serious musicians, and those with strong visual elements must therefore be lacking in musicianship. Why? We’ve never understood it. If you can have the best of both world’s why not?” He continues: “On stage I think our image is a big part of our performance, which in our early days was very much to our advantage. People aren’t always keen to watch a band they’re not familiar with, so if you can catch their eyes firstly there’s a chance they might listen.” Even though they may portray themselves to be anything but with their glam punk style and confident live performances, UG employ a great degree of emotion where the song writing process is involved:

“I think Dean brings very personal experiences into a lot of the songs. Still I Miss The Man is a prime example, which is a tribute to his father who died of cancer in 2006. He also writes quite frequently in the third-person. The Law of the Playground is a song about bullying, in this case leading to suicide, not specifically experienced first hand, but a story that taps into personal childhood experiences. I can personally relate to many of his lyrics as well and so I try tapping into that when I compose the music to go with them.”
Continuing on to discuss songs in the UG back catalogue we look specifically at a trademark song, Devil’s Toybox and how it has many meanings for the band: “The song was actually inspired by Dean’s collection of creepy dolls, individually made, from all corners of the world. They’re quite a sight in his living room I can tell you.” Lucas also says that the song is about being happy with who you are, and having fun: “It’s about laughing at ourselves, in a fun way, more rejoicing rather than a critic any kind of Goth cliché. Underneath it’s actually about us as individuals being judged by ‘normal’ people, when in fact, it’s those who wear their strangeness on the inside who are the worry.”

The band remain optimistic about the future and believe that their hard work has paid off, Lucas tells SPHERE about the positive mood in the Uninvited Guest camp as 2008 draws to a close: “In terms of UG’s sound and image I think we stand out pretty much alone on the scene at present, which has its pros and its cons. So whether we will lead a revival of some sort or not remains to be seen.”

As you might expect the four members are constantly inspired by darker themes and this has played a major part in their last two album releases, Faith In Oblivion being there first independent release in 2005 followed by Malice In Wonderland released in 2007 in the UK and earlier this year in the rest of Europe: “The title Faith in Oblivion was decided largely because it reflects the anti-religious tones running through much of the lyrics on that album. Similarly, Malice in Wonderland reflects the lyrical themes and the pun in the title is meant to be taken quite literally. ‘Malice’ represents the dark side of man’s nature; summing up many of the social issues discussed on the album. ‘Wonderland’ you might say is a little more ambiguous, referring to the settings in which we live.”

Like any genre’s standout acts Uninvited Guest will be trying to progress on their next record, Lucas says he is still proud and surprised by the direction of their last effort: “When we started there was absolutely no way I would have envisioned Malice In Wonderland. In fact even now I listen to it and go ‘where did that come from?’ But you know, that’s the beauty of collaborative art, you just don’t know how the ingredients will taste until you put them together. Now with our two new members Jane and Ricky you can guarantee the next album will be putting something else on the table too which will completely new and exciting.”

The band are currently recording their as yet untitled follow up to Malice In Wonderland.