Youmeatsix have worked hard over the last few years to carve out a reputation as one of the UK’s defining alternative bands. Seamlessly melding pop-punk and rock influences to create a lethal concoction that communicates to the listener in a variety of ways, the band have achieved monumental success touring internationally in 2010. We spoke with guitarist Max Helyer about the band’s plans for the new year. 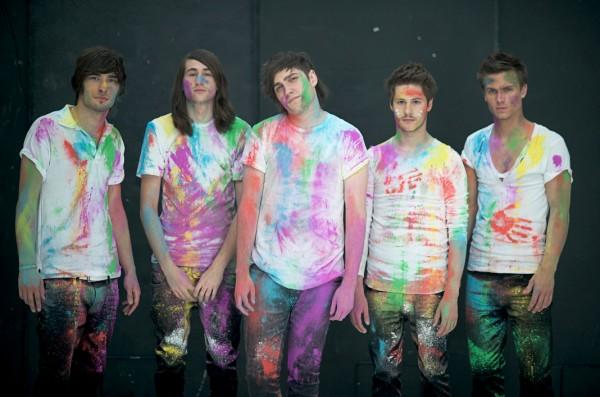 “None of us ever thought this [success] would happen”

S] Apart from the obvious success you have achieved this year in the charts, can you think of a few stand out moments that you will look back upon fondly?

M] I think that Soundwave Festival in Australia was amazing for us. We got to perform out there with so many of our favourite bands and now, great friends including Paramore, Parkway Drive, All Time Low and Set Your Goals. It was an amazing experience and the fans really were incredible for us there. So, there have been many great experiences for us out on the road, but that one really stands out for me. Then of course, there was us being invited to play Reading and Leeds this year, and having had the opportunity to share the main stage with some fantastic bands including Blink-182, and Weezer. I also got to see Thrice perform on both days which was amazing as they have long been one of my own favourite bands. For me, this year has been one of the best ever. It’s great to be ending it with this tour as well by doing double shows in Manchester and London which we have never done before. We are gutted to have had to postpone the two shows we had scheduled at the Edinburgh [Corn Exchange] because of the weather, but we have rescheduled those shows. Aside from that, it is great to come to the end of the album cycle for [‘Hold Me Down’] as well.

S] You have a great connection to the Warped Tour over in the States, how have you enjoyed performing there in previous years?

M] Warped Tour really is one of the best tours you can be involved in, if you are into this style of music. It’s definitely one of the most renowned alternative music tours – it goes on for a very long time and it’s very important for us to keep in touch with the people who we meet on the tour. For us, the next time we go back on tour in the States will be later next year, probably after the Blink tour.

S] Can you expand on some of the sonic ideas floating round for the second record?

M] Well, there’s going to be some really mainstream rock elements, and some of it sounds a little bit like the Foo Fighters. There are lots of different elements though which will surprise a few people. We have a good mix of really heavy songs as well as some great melodic parts. We are having a lot of fun thinking up new ideas, and I think that our fans will be pleased with what we are going to release. I think it’s going in a really strong direction.

S] What about a theme, will there be a strong idea expanding on the personal and uplifting themes of your previous material?

M] We don’t really think of it like that to be honest. We just go into the studio and do our best to write great songs. I think that it’s fantastic that the last album ‘Hold Me Down‘ had that kind of theme and people were able to pick up on that and take away from it, but we don’t make a conscious effort to create a theme when we head into the studio to record. We were very pleased to have such positive feedback from our fans and it’s great to think that our music makes a difference to them.

S] What about guest-spots? What was it like working with Hayley Williams of Paramore and do you have any more interesting ones planned?

M] My baby girl is going to be on it you know! There’s so many rumours about that, but nothing is set in stone yet. There’s definitely going to be a few on there though! We’re getting in touch with some of our really good friends from the last year of touring. The hope is that it will work well for them too.

S] How are you looking forward to supporting Blink-182 next summer?

M] We basically just got told that there was potential for us to go on the Blink 182 tour, and we were just like ‘Yeah, okay that would be amazing’, and didn’t really think any more of that. When we were told it was actually going to happen, I think we all lost our minds! I mean, it’s the band’s first tour in seven years and I saw them on that tour just after they released their self-titled album and I watched them as a fan and a lover of music – it’s going to be amazing to be on the road with them. We want to go on the tour and show people that have never heard of Youmeatsix before, what we are capable of. Then hopefully they will like it – it’s in the same kind of style [as Blink 182]. We’re just going to go on tour and having a good time. We’re getting to see our favourite band every day. We’re all stoked.

S] The band present themselves as very passionate on recorded material and this resonates with fans well who can relate to the words and sound – can you talk to us about what gives the band drive and inspiration to write as you become more popular and world-renowned?

M] I think it’s important for me to stay as ‘real’ as possible. For me, I have met a lot of the musicians that I grew up admiring and listening to, and unfortunately I’ve thought that a lot of them were ‘co**s’ – I’d never expect them to be like that. I think that it’s about keeping our feet on the ground all the time and remaining ‘real’ people while writing music because we enjoy it, just like we did when we started off. Hopefully our fans will enjoy the new stuff we come out with as much as we will enjoy performing it. We want to have a good time, but we are very lucky to be in this position and none of us ever thought it would happen. So, what excuse have we got to be di***eads? We’ve got everything we could want.

S] You are playing a number of northern shows this month – what do you enjoy most about playing shows in the likes of Leeds and Doncaster rather than just focusing on bigger places like Manchester and closer to home in London?

M] Yeah well, we are in Doncaster now and we’ve never been to Donny [Doncaster], unless you count Donnington and Download! It’s great to have the opportunity to play here and we are privileged. I mean, we have a great following in London, and in smaller areas like Kingston closer to there. We find that people often travel in from other smaller areas to come and see us when we play bigger shows in Manchester and London, just because we have been to their town before, and bothered to come and make the effort. We’ve know that some bands don’t play smaller cities or towns because they’re afraid they won’t draw a crowd, but we think that it’s very important to travel everywhere because if we make the effort, then the fans will too.

S] What are your plans for Christmas, are you taking a break?

M] I am going to be taking a break. I am going to be at my mum and dad’s house eating a lot of Christmas food and making myself fat as hell. Then, in the New Year I am going to see all the UK bands like Architects, Bring Me The Horizon and Your Demise and we are all going to have a party in Sheffield.

S] What are your biggest goals as we approach 2011?

M] We’re going to be writing in the early part of the year and through February, and then we will be recording the album in America in March and April, we are not sure who will be producing it, but it will be a fantastic experience and we are really looking forward to it. In the summer, once we have finished recording, we are hoping to have got some great festival appearances lined-up and we are looking forward to those before the Blink tour. We are looking at a September release for the second album in 2011 but that’s not set in stone yet as we haven’t started recording. After that we will be touring for about 18 months in support of that!

S] What message have you got for the fans that have supported you this year?

M] I just want to say thank you to the people that have helped to make our dreams come true. We are glad that our music makes you happy and if you enjoy it keep coming to our shows and we will enjoy having you sing a long with us. Thanks for giving us a great year.

M] I’ve got a couple in mind. I want to try and quit smoking cigarettes because I am terrible with them. Otherwise, I want to play some more football and do some exercise so that I can keep myself fit.