Punk pioneers Crass bring to head their ambitious ‘The Feeding of the Five Thousand Remix Project’ this month with ‘Normal Never Was – Revelations – The Remix Compilation’, a collection of some of the stand-out remixes following their single series including 65daysofstatic, Jack Matthew Tyson and much more. 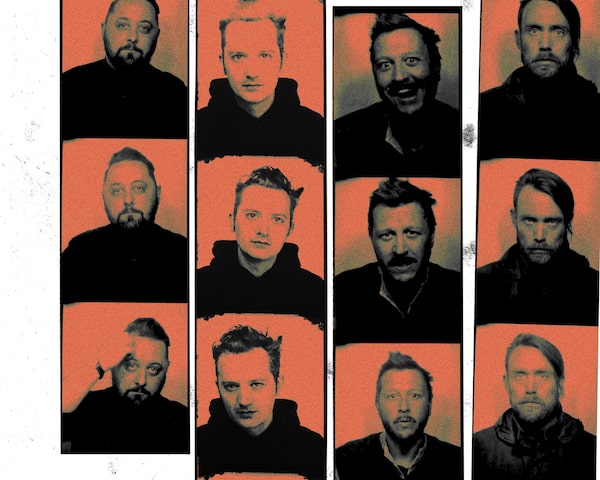 Fresh remix of ‘Women’ is from Sheffield-based experimental stalwarts 65daysofstatic. The band serve up their spliced take of the track, utilizing their unique post-rock gone techno via algorithmically constructed sonic soundscapes to drag the original’s bitter contempt through dirty house at a 90’s basement rave.

65daysofstatic share this statement alongside release; “Sometime in the mid 2000’s the punk and hardcore scene in Sheffield hit a sweet spot. There were bands wanting to play, venues willing to put bands on and people interested in those two things happening. An imperfect storm. The attraction to a band like Crass came from being at some of these shows. Up to this point, I had detoured towards electronica, grunge, shoegaze etc but there was never, for the most part, a connection between the bands I’d listened to and the growing political disquiet I was experiencing. To hear this being talked about so explicitly was gratifying. It also helped that the tunes were great. Crass have always been an important landmark on the musical landscape and are an example of why now more than ever we need more dissenting voices in music.”

In 2019 Crass took the step of making the original separate track stems of their seminal debut album ‘The Feeding of the Five Thousand’ available as a free download. With a call to take the original sixteen track recording in its pre-mix state, the intent was for people to create their own remixes and interpretations and breathe fresh life and ideas into this revolutionary music.

By the beginning of 2021, over two hundred remix tracks had been forwarded to OLI and the number was growing daily. It was at this point that it was decided that a double CD release should be made from a selection of the available tracks, each CD having the same running order as Crass’ original album.  That was the easy part, but putting it together was altogether a different matter. The selection committee, made up of Rimbaud and Steve Ignorant of Crass, took several months juggling the impossible. Some of the tracks had scores of remixes to choose from, whereas others had as few as three, but eventually the job was done, and ‘Revelations’ came into being as an addition to the ‘Normal Never Was’ project and its commitment to Refuge.

In the words of Rimbaud, “‘Revelations’ is exactly that, a mind-blowing retake on the ethos of Crass and its all-out assault on commonly held values. Crass’ message was ‘question everything, find your own answers’, and this is precisely what these remixes express – peoples’ music made by the people for the people. Normal never was, so let’s keep it that way”.

First released in 1978, ‘The Feeding of the Five Thousand’ pre-empted rap and grime in its hard-on-the-beat, fast fire, uncompromising lyrics and the iconic sounds and messages are ripe for reinterpretation. Crass encouraged people to rip apart the sound and ideas and create something new, then send the files to Crass Records for future releases and charitable projects. The message is DIY like it never was before. “Yours for the taking, yours for the making,” Crass said. “You do it, we’ll stew it. Mix it backwards, forwards and upside down. Turn up the heat and fix it with a downbeat, bring in the trumpets and let ‘em blow, let the piper call the tune to let us all know. It’s up to you to do what you like with it. The only limitation is your imagination.”

All monies raised from the project will go to the charity ‘Refuge’ who said; “We’re incredibly grateful to Crass and their team for helping raise vital funds for Refuge. Since the start of lockdown, Refuge has seen a 66% rise in demand for its Helpline, and a 950% rise in visits to its Helpline website. This shows the sheer extent of the need for specialist domestic abuse services – not just during lockdown but beyond. Every penny raised helps us to ensure that no woman or child is turned away from safety.

‘While lockdown itself doesn’t cause domestic abuse – abuse happens all year round – it does, of course, have the potential to aggravate pre-existing abusive behaviours – and the data we have shows us the increase in the need for our services during lockdown. Refuge worked incredibly hard at the beginning of the pandemic to make sure our services remained open and remained safe. The generous donations we have received, including those from Crass, mean we can continue to provide the life-saving and life-changing services that women experiencing domestic abuse need and deserve.”