Last year Black Country mainstays God Damn were reborn with the release of their uncompromising self-titled third album, one that truly felt like they’d shed all preconceptions and were fully dedicated to a sound and delivery that they’d long denied themselves. Now, with a new lease on life, the band have penned their brutal and unapologetic new LP ‘Raw Coward’, out September 10th via One Little Independent Records. 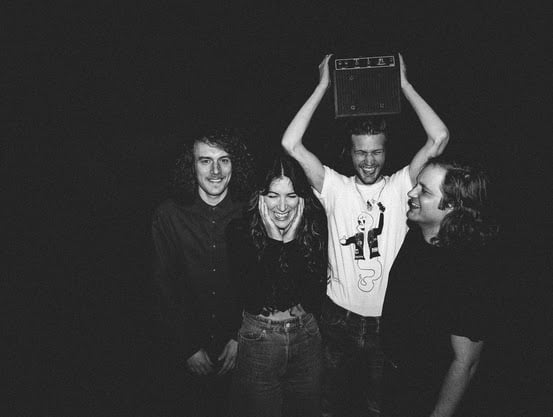 The announcement comes alongside new single ‘Yout’ and its crazed video. They tell us “The opening line “When he was just a baby, his mother told him son, be a good English boy and sell the world their guns” is a good foreshadow to a repeated theme on the record; that false pride that’s groomed into us from a young age. Blinkered to the real atrocities and corruption that have both made our country and continues to do so, that sense of higher moral rank, that sense of superiority and privilege that many still unfortunately feel they’re entitled to. If we’re going to evolve, we need to see what we’ve done and are doing wrong. The death of false pride, finding your true identity and personal growth.”

Video director Jacky P says “Working on ‘Yout’ changed my life. I had to take steroids and sprinkle miracle grow on my face to grow the moustache for the role but it was worth it. And now I can swan around saying that not only did I direct and edit the video I’m also the star at the centre of the chaos. Long live God Damn.”

February 2020 saw God Damn disrupt the quiet before the storm with a blistering UK tour that shook the walls of some of the country’s favourite grassroots venues, showcasing their new material to hordes of sweaty bodies, but the incoming pandemic put a stop to the promo train and subsequently plunged them back into the shadows just when they were at their most amped. You can feel the pent-up aggression in every fibre of ‘Raw Coward’, from its opening riff to its final feedback educed fade-out, it brims with an abrasive heaviness that threatens to buckle under its own weight at any time. Ambitious and cynical, it lashes out in all directions, taking wild swings at nationalism, structural power abuse, the music industry and capitalist machine.

Intro ‘English Slaughterhouse Blues’ and ‘Yout’ are a powerhouse combined opener that make their intentions undeniably clear, with ferocious distorted vocals and savage guitar sounds. Famously relentless drummer Ash Weaver battles fearlessly behind walls of chaos while frontman Thomas Edwards’ strained delivery has never sounded so raw. The darkly perverted ‘Radiation Acid Queen’ attacks from all angles before ‘Cowkaine’ crash lands explosively with an irresistible groove. On ‘Shit Guitar’ Edwards laments that “there’s no such thing as rock and roll. There’s no such thing as god. So climb down from your crucifix and play it like guitar. Your idols are all paedophiles who sold you who you are” before unleashing a revoltingly doom-laden hook. One of many moments on the record that God Damn aren’t afraid to tackle poignant and complex subject matters with obsidian black humour and an almost jaded self-awareness.

‘Little Dead Souls’ parts 1 and 2 are a juggernaut pairing that wield a dark lyricism matched by their sinister tone before serving us the rotten, unforgivably addictive ‘Drop Me Off Where They Clean The Dead Up’. Beast of a track ‘Raw Coward’ tears out of the stalls screaming and barely lets up before album closer ‘Dogshit In The Autumn Leaves’ finally gives us a chance to take a breath, capping off a bold, crucial record.

Having previously recorded with the legendary Sylvia Massy (Smashing Pumpkins, Deftones, Johnny Cash, Slayer), and taking on two new band members, Hannah Al Shemmeri on keys and Rob Graham (Working Men’s Club, Drenge, Wet Nuns) on additional guitars, God Damn were confident in their ability to put something strong down themselves. With their back-to-basics approach and unrelenting desire to let it all hang out, they used lockdown as a time to bash through 10 destructive anthems while putting an emphasis on home experimentation, completely free from the pressure of the studio or outside influence. The album was then mixed by Jonathan Nuñez of Torche. In true DIY fashion Al Shemmeri was also on art and design duties, utilizing her creative skills to help visualise the disturbing world of God Damn and fine-tune its concepts.

Thomas Edwards expands; “We weren’t overly self-aware of making a record which in the end made for something purer. Having not long made a record with Sylvia I felt like she gave me all the tools I needed to engineer and produce the band myself, she taught me that the best tools you have are the ones in front of you and how to get the most out of them, pretty hilarious coming from a woman with the largest microphone collection in the world but I think that gave me even more confidence to do away with all the dick swinging gear wankery elitism.

The guitars were done at home, you can year my creaking conservatory in the wind or the sound of my kids playing in the background on some tracks, I snagged time where I could but mostly those parts were done at 3am.

Due to restrictions it was obviously hard to get together as a whole band so I sent tracks to Hannah and Rob to do at his lockup in Sheffield, I’d get FaceTime synth chats with them in some weed induced obsession over the songs, they gave it that psych depth and sprinkle of prog, it was actually a really exciting way of doing things, they were totally egging me on with the more ridiculous and dark lyrics, we had a laugh and super in-depth conversations about it all. It felt honest, visceral and joyous to be bringing those two into the equation for this record, despite the times, the human connection and love was there, it felt like us mates were pulling ourselves through with this, a coping mechanism if you will. We had a blast.”