Photo by Anete Lusina from Pexels

Misogyny in music is not a new issue. Although lyricism in music is a personal choice, sexism is usually swept under the rug. This issue can take many forms, including using gendered slurs such as ‘bitch’ and ‘slut’, describing sex as an act that is done to a woman and not with a woman, and the sexualisation and objectification of women in music videos. A lot of the sexism that surrounds the current music climate is perpetrated by men and involves sex or sexual violence. 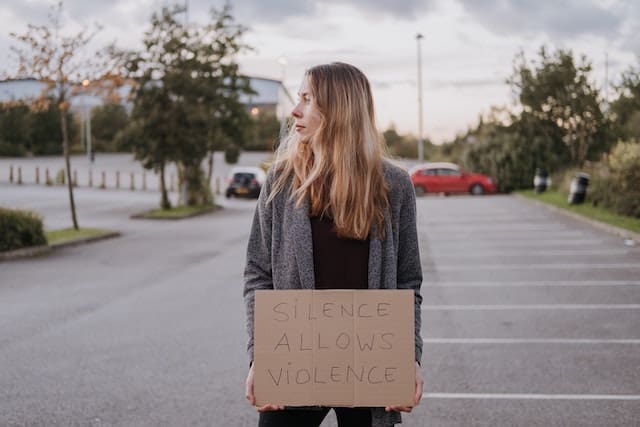 How do lyrics perpetuate misogyny?

As mentioned earlier in this article, sexism in music can have many faces.

The duality of the word ‘bitch’ is something to consider in the context of misogyny in music. It can either be used negatively (“she’s a bitch”) or positively (“she’s my bitch,”), and it’s important to note the way that the word is used depends on how the lyricist perceives the recipient. It can be used as both a directed insult (example one) or as a possessive adjective (example two). Either way, this gendered slur is too common in male written lyric patterns.

Sex being described as an act done to women and not with women also is an issue in lyricism, given the current conversational climate surrounding women’s empowerment and sexual liberation. This description can take many forms, from the harsh adjectives used (‘hit it’, ‘bang’, even ‘fuck’) to full lines or verses (‘I only say I love her when I want to fuck her,’ Drugs – Lil Aaron, ‘She bend it for me sideways, I might have to fuck her on the highway,’ Oh Mami – Chase Atlantic). Sometimes even full songs are guilty of this, like ‘Blurred Lines’ by Robin Thicke or ‘Or Nah’ by Ty Dolla $ign. Sex being described as a one sided act instead of something that happens between two (or more) mutually consenting adults presents a problem – that the objectification and sexualisation of women is okay because sex is one sided anyway.

How has this been normalised?

The effect of misogyny in music resonates with women worldwide and can do this even if they don’t feel like it does. Far too often have I heard friends, who listen to misogyny in lyrics on a regular basis, say that they are desensitised to this kind of language because they have been listening to it for so long. This misogyny, consumed by listening to your favourite artists, normalises violence against women. This is because, when sexism is so consistently consumed by an audience, it desensitises them due to repeated exposure.

What effect does this have on women?

This common sexism shapes the way that women see themselves.

One observation that I have made, having been a fan of male artists who use misogyny in their lyrics, is that their misogyny affects their fans. The longer you idolise an artist, the more likely it is that you accept morally questionable actions that the artist makes. There is also a phenomenon around fandom that doesn’t have a name but will be referred to as being the ‘cool fan’. Being the ‘cool fan,’ means you accept behaviour from your favourite artist that you may not accept with ‘normal’ people in your life. The desire to be the ‘cool fan’ is so damaging because you want the artist you idolise to like you, so you desensitise yourself to their behaviour, so that it isn’t a problem.

The major problem with the normalisation of objectification and misogyny in music is, as mentioned earlier, the desensitisation of sexism. As an audience, we need to be better at identifying morally questionable or just wrong behaviours from our favourite artists. If we become desensitised, we will be less likely to identify sexism in our everyday lives. Also, misogyny being normalised and seen as something that ‘just happens’ means that, as a result, we perpetuate these morally questionable views.

Allowing men to be misogynistic in music just because it sounds good desensitises audiences to the objectification and sexualisation of women. This puts women in danger.