Ministry comic to launch in 2014 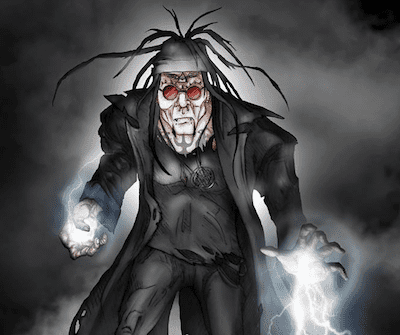 Each of the 13 issues in ‘Ministry: The Devil’s Chord’ — The Chronicles Of Alien F. Jourgensen’ will be based on one of the industrial metal band’s albums, including ‘Psalm 69’, ‘The Land of Rape And Honey’, and ‘The Mind Is a Terrible Thing To Taste’.

“I’ve been wanting to step away from music for a bit, switch gears…then I met Sam and then POOF! Sam turns me into a superhero,” Jourgensen said.

Sam Shearon says: “‘The Devil’s Chord’ focuses on conspiracy theories, the occult and government corruption as it follows the adventures of Alien F. Jourgensen, a young musician who’s discovered by a record label that attempts to change and control him. But as Alien focuses his attention on his passion, music, he triggers his inherent powers that reveal the true intentions of those who really run the planet.

The comic will incorporate elements from Jourgensen’s own history, and he hopes to include cameos by other real-life heroes.

“I’d love to have people like Trent Reznor, Billy Gibbons and Billy Haynes be characters in the series, I mean, who doesn’t want to be a superhero?”