Sleigh Bells – composed of producer/guitarist Derek Miller and singer Alexis Krauss – will be releasing their incredible new album, Texis, this Friday September 10th 2021 via Lucky Number. A new track from the album, entitled “True Seekers,” has been released today. The song is a classic Sleigh Bells slow burn in the same vein as much-loved songs like “Rill Rill,” “End Of The Line,” and “I Can Only Stare,” and one of the best songs in the band’s arsenal. “True Seekers” follows the release of lead single “Locust Laced” and album track “Justine Go Genesis” in anticipation of the record’s full release this week. 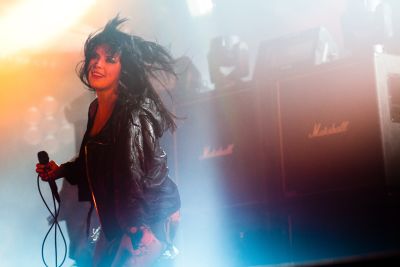 It’s been twelve years since Sleigh Bells burst into the public consciousness, emerging fully-formed from tiny New York City venues onto the global stage with a sound entirely their own. Over four incredible full-length albums and one EP, Miller and Krauss have shaken up independent music; the duo were among the first to fully integrate the now-ubiquitous sounds of pop radio and hip-hop into their guitar-based melodies. They’ve opened for everyone from LCD Soundsystem and Hot Chip to the Pixies and Weezer. They’ve played Saturday Night Live and Later… With Jools Holland. Their sound has been borrowed by countless pop producers looking to give their tracks some much-needed edge. They’ve been championed by everyone from Spike Jonze to Reed Morano to Sofia Coppola, their songs providing the perfect aural complement to films and TV shows around the world. And now – they’re releasing a brand new collection of music via Lucky Number.

Their new album, Texis, is the sound of the duo letting go of hang-ups and inhibitions and allowing themselves to embrace the sort of loud, colorful, genre-melting music only they could make. “We stopped worrying about whether or not we’re in or out of our comfort zone, or if we were being repetitive or formulaic,” says Derek Miller. After pushing themselves to sound less obviously “Sleigh Bells” on their 2017 EP Kid Kruschev, he found he’d started to reject a lot of his best creative impulses. On Texis, the duo decided to simply push the first domino and see what would happen, chasing down whatever excitement and inspiration followed; the resulting album is pure fireworks, full of the best songs Sleigh Bells have ever written and recorded.

The first domino was pushed in late 2018 when Miller sent an early demo of the track that would become “Justine Go Genesis” to Sleigh Bells singer and co-writer Alexis Krauss, feeling excited about its ultra-fast tempo but slightly self-conscious about his cartoonish, over-the-top metal riff. Krauss clicked with the music right away and wrote her bright, unabashedly poppy melody within a few hours of receiving the track, resulting in a song that sounds like the unexpected intersection of Metallica, Spice Girls, and ‘90s drum and bass. The wild maximalism of “Justine Go Genesis” opened the floodgates for the songs to come, like the exuberant cheerleader metal of “Locust Laced” and “Tennessee Tips,” which whips dramatically between thrash riffs and spacey shoegaze sections. Miller and Krauss didn’t go “back to basics” by emulating the sound of their landmark debut Treats, but they did reconnect with that record’s brash, speaker-rattling energy. The result is an album that’s the most fully actualized version of the band, merging the more refined pop craft and deeper emotional palette of their 2016 album Jessica Rabbit with the dopamine-blasting bangers of their earlier days.

One of the band’s goals in writing Texis was to infuse even the most abrasive and full-blast songs with something that made the music feel “nourishing” to them. “The thing I’m most attracted to is the juxtaposition of happy and sad, melancholy and hope,” says Miller. “A lot of this is about trying to hold on to a shred of optimism through sheer force of will, and I hope this music can give people some joyful energy and confidence.”

Pre-order Sleigh Bells’ Texis here. Digital and CD versions of the album will be available September 10th, and Vinyl on December 3rd.

Sleigh Bells will be touring North America in Autumn and Winter in support of Texis; Kills Birds will be opening on the Autumn dates. UK and EU dates to be scheduled for 2022. Tracklisting and tour dates are below.