By Editor August 9, 2013 Blogs, Culture, News, Something Alternative
No Comments 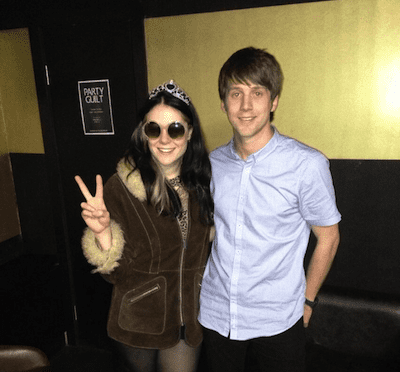 A sense of pure devotion and loyalty towards everything it stands for, its heritage, tradition, history, culture and all those passed glories that have rained upon us. I say all this with my chest puffed out as a Yorkshire lad myself, I know exactly what I’m talking about as those hairs standing on end moments have slapped my neck plenty of times over the years; watching acts such as the Arctic Monkeys, Milburn, Pulp, The Cribs, Pigeon Detectives and The Kaiser Chiefs to name only a few that have risen to critical acclaim on the ethos of staying true to their roots, not dropping their accents, and wearing that white rose with honour.

So saying all that, (I apologise in advance if you don’t hold your home county in such a high prominence), you can imagine how I must of felt when I was asked to choose some of my favourite bands and artists that York and North Yorkshire has to offer for a stage at this year’s Galtres Festival.

For some folk this may seem an easy task, but with a county filled with so much talent which I showcase every Saturday night between 8pm to 10pm on the airwaves, this wasn’t so (shameless plug for BBC Introducing in York & North Yorkshire).

It was difficult to choose my defining favourites for the allocated slots which they needed to make this line up perfect. For a festival stage with the BBC Radio York brand stuck on it; I needed it to be a good one.

Before I introduce you to all the acts that made the final cut, and the reasons why you should check these particular musicians out, let me just say I could have filled the weekend and all the stages with only pure local singer songwriters, bands, rappers, DJs. Of course, that’s the job of festival organiser James Houston.

For those who aren’t familiar with Galtres Festival or what I’m talking about this far let me shed some light on what you might be missing out on. The festival is celebrating its ninth birthday this year, in its new home of Duncombe Park mansion which boosts a few hundred acres of beautiful park land like God’s own back garden set in North Yorkshire.

The festival apart from having 7 stages, with over 100 artists performing over the three day event, with headliners Reef, The Strangers and Maximo Park entertaining punters till the early hours also has plenty for the family, such as film making and music workshops.

Another tick in the box of requirements is for those of you who are into your local produce. With over 100 beers and ciders, the majority of these brewed in Yorkshire. Also on offer is the local grub from Whitby Scampi to Yorkshire puddings, what more could you want? Bands! Of Course. Friday is an all day and night event, it’s where we take over the Black Howl stage or as it’s now known the BBC Radio York Unsigned Sessions.

Choosing these acts as I’ve touched upon wasn’t the easiest of decisions. I didn’t want to miss anyone out but evidently I had to, this isn’t a reflection on their musical endeavours. I had to make this stage a showcase of the diverse acts that we’re lucky enough to have under our remit. Think of it as a York and North Yorkshire’s various artists’ compilation mix tape. ‘Now That’s What I Call 2013’.

Kicking off proceedings is Richmond’s, Nico Cara who is a singer songwriter, one man, one guitar and a bag full of haunting melodies combined with dark undertones.

Following on is York’s very own spoken word, punk poet songwriter Mark Wynn. It’s not lazy journalism to say you can definitely see the Johnny Clarke and Mark E. Smith influences. Hitting the nail on the head with his cutting social commentary and witty observations.

Next up we have Miaow Miaow, who recently became the first signing of new label Anonymous Records. If you’re into post-punk nocturnal pop disco, as they like to call it. Then you don’t want to be anywhere else.

Asio’s Eyes will be gracing the boards bringing their room spinning, psychedelic indie trip to us. It’s swampy which makes you sway to the grooves of the soul inducing vibes.

Fresh from her appearance at Glastonbury on the BBC Introducing stage, Richmond’s very own Pip Mountjoy. This lady truly is living up to the name some clever so-and-so coined “The North Yorkshire Songbird”. With two EPs under her belt and A&R types sniffing about it surely won’t be long before she takes the world by storm but (hopefully) not until after her appearance on the BBC Unsigned stage.

In April, BBC Radio 1 (after a tip from BBC Introducing York and NY) choose this as their song of the week, ‘Midnight’ by Pateley Bridge’s Rosie and rightly so. Expect some electro party funk to get it going, so limber up and get involved.

After been blown away by these, seeing them on the off-chance. I had to find out more about this female fronted three-piece who Sir John Peel gave a nod too. For fans of soulful harmonies over heavy, unpredictable tension then Honeytone Cody will be right up your street.

Next up we have York band Bull, who fuse 90s grunge echoing that ever-popular American indie sound. Their songs are instant, full of raw energy and guaranteed to get you hooked.

Mod-fuelled, swinging sixties, anthemic choruses and killer riffs, Alistair Sheerin’s got this in bucket loads. Recently supported the Wirral riddler Mr Miles Kane and in the process of working with Tom Clarke from The Enemy. Need I say more?

La Petite Mort have a knack of been able to capture that morning after, the night before sense of euphoria. Hypnotic and hazy just as the evening may be at this point. Well what a band to take you there.

Now, things are about to get bluesy with some dirty garage rock n roll in the form of The Buccaneers. It’s hard to believe there tunes were written in this decade as they have that vintage dust all over them.

Next, These face-paint clad A Joker’s Rage bring a blend of rock and metal but not in the usual stereotypical sense. Their songs are truly well crafted, with skilled musicianship, with a singer who can sing and not hiding behind cliched screams.

Flying the flag for York, having played on BBC Radio York, on numerous occasions, as well BBC 6 Music & Radio 1. The Littlemores are on the brink of becoming the name on everyone’s lips, maybe the next great guitar band to rise from Yorkshire? “He was never gonna wine and dine her, cos his dad was a northern miner’ with lyrics echoing Billy Bragg and, Alex Turner most probably.

As the night is draws to a close, what a better way to warm up for the headliner than the prolific and hugely respected troubadour Daniel Lucas and Boss Caine. Heart-wrenching lyrics and a whiskey soaked vocal that rings a chord with anyone who knows a good musician when they see one. For anyone who isn’t aware of this singer songwriter, you soon will be. BBC Radio 2’s Whispering Bob Harris invited him for a session and cites him as a “stunning UK talent”. That really is a fact.

Finally, last but no means least. Fox North Coalition starts from where Boss Caine left off. This is roots-ridden American swamp music at it’s best and I’m unaware of anyone who does it better than FNC in York & North Yorkshire, if there is then I will happily shake their hand. This band will truly prick your ears up and make your hairs stand on end. Exceptional guitar playing, matched with howling at the moon crooning. What a way to close this exceptional stage, dare I say it is the best of the whole weekend. Yeah, I do dare, as it’s true.

So come along and join me, where I will be compeering the stage as well as spinning BBC Introducing tracks from York & North Yorkshire between sets throughout the day.