Up and coming musician Harrison Rimmer is due to release his debut album, Larkholme, on 22 April. The indie, punk and rock singer-songwriter from Fleetwood sat down with Sallie Phillips to discuss the album, his musical influences and inspirations, and his future hopes for his career. 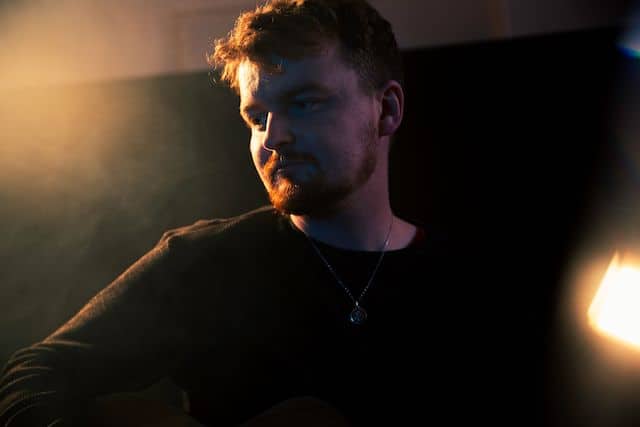 Hi Harrison. I had a bit of a listen to your music this morning, and I love it.

That’s great, thank you. That’s fantastic, I’m glad you like it. Dom [Smith] actually did the PR for two of my first songs, Veins and I’m on Fire, which was really cool.

I had a listen to your ‘C’ EP earlier.

Oh wow, that came out back in 2015. I think of that as my launch for what’s happening now. I tried to get something out every year for the past ten years, and it’s been crazy, and now I’m finally doing an album.

Who are your biggest musical influences?

My biggest influences have been the likes of Nirvana, Marvin Gaye, Bruce Springsteen, Frank Turner. I love Slayer, and Mongol Horde, a side project of Frank Turner. I was raised in a household of Meat Loaf, R ‘n’ b and soul. My dad was a biker in the 70s and I was obsessed with 70s rock. I discovered punk rock when I was 15 and he played me NOFX, and I remember thinking this is crazy. I got into 90s punk and finally into metal and stuff like that which was really cool. I love 70s music, the whole sound and atmosphere of it all.

Let’s talk success, with your singles, EP and your debut album coming out. What do you define as success, as a musician and as a person?

From a musician standpoint, it’s the fact that if I hear someone liking some elements of a record, like a phrase or a small bit, that for me is the biggest compliment. People say ‘I heard this song and it did this’ and someone once said to me that a song I wrote was a massive gamechanger in their song writing, and it was really surprising to see that I’m able to influence others. Music has always been my best friend, it’s something I can turn to when times get hard. I think it’s the same for a lot of people and to have that impact on someone else’s life with something I wrote in my bedroom is amazing. From a personal point, I’m all about people. The satisfaction is being raw with the lyrics. You rip out your heart and throw it at the page, that’s what I’ve done. If I’m going through a bad time, I will write it down, no matter how it affects me, and being able to connect with someone I don’t know through something I wrote is so important to me. There’s been a lot of times in my life when I’ve had mental health rumbles. There are so many moments where music has been a comfort to me, I can’t pinpoint one, particularly when I’ve had friends die, and I’ve been balling my eyes out while writing the lyrics. The first time I heard Pearl Jam’s version of The Who’s Love Reign Over Me, I was 18 and thought what the hell am I doing with my life? I still ask that now at 29, but when I first heard that, it all seemed to click, and I knew I had to go to university and pursue music. If you listen to a Slayer song, you’re pumped ready to run a marathon.

What influenced the new album, ‘Larkholme’?

I went to record a couple of singles back in November 2019 and one of them is the second one off the album and the other is further down, called Lost With You. I just thought I’ll do this and see if I like them. They’re really different. The South is me trying to put rockabilly and punk together and Lost With You is like Brian Adams meets Foo Fighters stadium rock anthem sound. I originally recorded my first album seven years ago when I released C but I shelved it because I thought I could write better songs. A lot of the songs came out of lockdown, with The End being me criticizing how the Government handled things, and a dare from my producer to write a big rock song to finish the album. So for that I listened to a lot of 70s rock – Sabbath, Queen, and 90s punk too, and weirdly Ed Sheeran. It made me think I can do it. Then there’s Prologue which is about when we all get out of this mess and we’ll all be happy. There’s also influences of Springsteen, Johnny Cash, Elvis, and Frank Turner. I’ve tried to make this my statement; this is the stuff I listen to and make it a new experience. My friend told me to just play covers, and I thought no, I’m going to write more songs now, and that I should write a wide range of genres as otherwise people get bored by track 4 and I like to keep my audience interested. I have Rum, which was like Rolling Stones meets Beatles.

What are your biggest motivators?

It’s a lot about trying to express myself. Music has always been my comfort and my go-to. My motivation has always been I just got to do it for me, be it gigs, live streams or anything. A lot of people kept telling me not to do this, but I just thought I’m going to do it more. My musical side is very much I will do this because I can. Music amplifies your personality, and I know that’s what I had to do.

What do you hope people will get out of the new album?

I just hope they like it. I’ve been talking about this record for ages. For me it’s another tick in the board. This album is super-personal. The album artwork is the street I grew up on as a kid. It’s not trying to reconnect with my audience, I’m just trying to make the next step in my career. It’s about me giving my best for the people. I hope it’s a travel buddy. I want this to be my version of Born to Run, a record you can have in the car and have it blasting out on a trip and leave the CD player alone. I travel around the country like a lunatic for gigs and whatever else, and I want to be part of that soundtrack for someone. Everyone can remember their first album that they bought or got given, and I want people to remember buying this album. Music encourages ways of thinking or emotions, it can set you up for the day, or bring memories to the forefront. I had ten years’ worth of songs ready for this album.

Who have been your personal influences?

I’m really grateful to my guitar teacher. He always taught me the older stuff, like Rock Around the Clock and Twist and Shout. I was taught that you have to get the rhythm from these kinds of songs to get that kind of shouty type that is heavy rock. I’d like it if people saw the heritage of the songs before they start trying to play them.

What are your future career aspirations?

I’d love to be playing theatres, I know that’s a big statement. We have a big party to release the album on 22 April. I love playing punk rock venues and dive bars. The second I go into a dive bar, I’m home. I played a theatre once and I just got the bug for it, the space and all, a room full of people. I had my first big gig at a 700-capcity sold out place in Holmfirth. I was like this is what it could be like if I play my cards right. At this point, ten years in, I’m just happy to be playing gigs and I want to keep touring. I want to see more of the world, want to play new places and to meet new people. I’d really love to play a theatre but the fact I still get to walk into a place and play a gig is just perfect for me. I try to keep myself grounded, and just being able to pick up a guitar and play takes a lot. The big plan is to get this album out and start on album two, and keep playing, and keep trying to be a good person. To be able to still do this and to be able to play is great. You’ve got to be positive. I had lots of songs ready, enough for five albums and I just wanted to keep going and recording.

My writing is a lot more auto biographical than I’ve done recently. I’ve tried to keep my life a bit mysterious in the lyrics. My lyrics seem to be getting rawer. I think musically, this is the best work I’ve done in ten years. I’ve also starting demoing songs for the next album and because as I want to be a writer and write for other people too. I’ve noticed the songs seem to be more raw lyrically.

Where can people buy the album and where can we see you play?

You can get the album on Bandcamp or get a CD or download it. You can also stream it on places like Spotify or Deezer or other sites. If you want to see me play live, I’m touring regularly, I’ve got a tour starting on 15 April, playing in Stockton. The album launch show on 22 April is happening at the Fulford Arms with the full band. I’ve not played a full band show for over a year. There’s a full list over on my Facebook page, with dates right up to 2023 already. If you see on my social media me talking about the people behind the album, check out their stuff as well. My name is on the album but in order to make it I needed an army. I’d say check them all out.

Thank you very much for your time Harrison!