Listen as Haxby Swango’s James Hutchinson (Hutchi) and Street Soldier’s Laurie Caudwell (LCV) talk to Dom Smith about their friendship and how they’ve been inspired to create weird and wonderful Hyperpop and Raggaeton sounds, coming out of North Yorkshire. 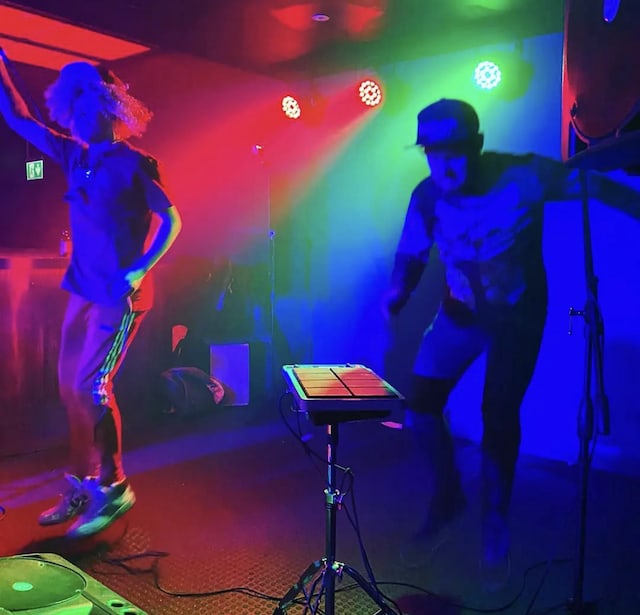 On creating a live pop act to appeal to the masses: “We’re putting less pressure on ourselves [with this project]…”

Laurie on the differences between creating for Street Soldier and Hutchi: “I have to be a lot more in-time! I’ve got to be tighter! [laughs]”

James on the difference between creating for Hütchi and Haxby Swango: “Anything I can imagine now, I can just do. So long as Laurie can do the drums, and I can hold my breath for the vocals! I kick myself for not doing it earlier.”

On the friendship, James says: “I’m quite difficult! Ha! Laurie just gets me, man. We’re older now. We’ve been through a lot together. We’re much better at communicating. Laurie and me together, we can bring the party,” he adds: “We just wanna make sure it’s fun.”

On how music has helped with personal development, James continues: “I moved around a lot as a kid. I was on my own a lot. I was either gonna be a musician or a murderer. It’s a constant process that’s never over. It’s an obsession. I always wanna get better.”

On bringing Hyperpop to Yorkshire, James comments on how important it has been to bring the music straight to the listener: “We’re putting on our own shows now, we’ve got our own PLANET shows. It’ll be like our own travelling circus! We’ve got our debut event on May 20th. Otherwise, it can difficult for promoters. You have to put it in front of them! This music is for the listener though. They’re short, snappy, enjoyable pieces. Just energy.”

Listen to the full chat here: