Amplifier release their much anticipated third album ‘The Octopus’ on January 31, 2011, through their own label AmpCorp. A special edition version will also be available, which will be limited to 500 copies only and is a 70 page CD book detailing ‘The Octopus’. Each of these will be dedicated in hand by the band. 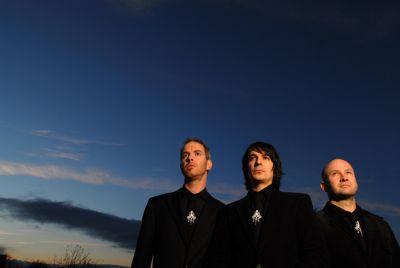 Size isn’t everything. But Amplifier’s The Octopus is big in every respect and dimension. Three years in the making, universal in its concept, and spread across two CDs (three discs in vinyl format) it can now be discovered like some Rosetta Stone that will reveal ever more of itself over the weeks, months and years that you live with it.

Speaking for themselves, drummer Matt Brobin, bassist Neil Mahony and the band’s vocalist and guitarist Sel Balamir says: “The one element of our music that most people perceive is its panoramic quality – we have a commitment to excellence. That’s what Amplifier is – everything to the best of our abilities.

“It’s taken three years to do and honestly, I don’t think we could ever repeat the effort. I also think this is very probably the best thing we will ever do.”

The concept of ‘The Octopus’ may be complex – “It’s the idea of something controlling you. Something closer to you than your skin but you’re not even aware of it…” – but the dream is simple – “We want this record to develop a mythology way beyond ‘the third album by Amplifier’. We want it to grow over the years to the point where it is just ‘The Octopus’. And we are like the ghosts in the machine.”