Ahead of the release of their incredible (and already critically acclaimed) sophomore album ‘Modern Escapism’ (out October 8th), post-rock juggernauts blanket have released their new single “Romance”.  Watch the video HERE 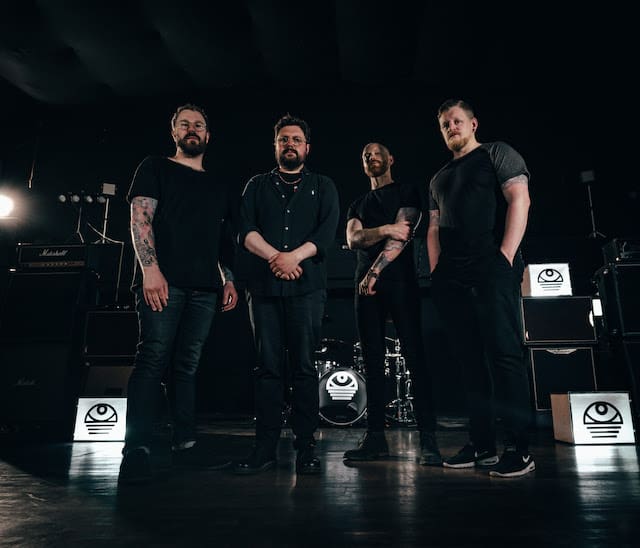 Speaking about the track, the band said, “Taking influence from metal and post-hardcore, ‘Romance’ is one of the heavier tracks on the album, and it’s also one of our favourites to play live. It is a song about obsession, about people being so obsessed with the lives of others, that they create a faux reality, inserting themselves into the lives they are preoccupied with and jealous of.”

“We wanted to find someone with a haunting scream to guest on the track, and all agreed on GosT to add his death-metal-meets-dark-synth-wave approach, and make ‘Romance’ a complete and more realised piece. Working with GosT was super straightforward too, we did everything remotely which has been the case with almost anything in the past year anyway, so we were used to it. We sent him the project and he sent us audio of his performance, and it was perfect on the first try. We couldn’t be happier with how it all turned out, and we hope people enjoy listening to it as much as we enjoyed putting it together.”

Next week finally sees the release of their highly anticipated album ‘Modern Escapism’. The band couldn’t be more excited to finally unleash this masterpiece out into the world.

“ ‘Modern Escapism’ is a record about the way we consume the lives of others, and the dangers that come with this. The narrative of the record features a non-specific voyeuristic protagonist, the ‘Static Man’, who watches the lives of others as if he was standing outside a tower block, and can see into each window, finding a unique chronicle behind every door. This record is the culmination of over a year’s work, and we’re so excited to finally be sharing ‘Modern Escapism’ with the world. There can be no doubt our sound has evolved but we are counting on the proponents of our previous record to move forward with us. We began down many different avenues with this record, even basically having a completely different record completely written at one point until we eventually settled on the idea of bringing in influences that we had grown up on from the post-hardcore and metal world alongside the shoegaze and post-rock that were already a big part of our sound.”

Modern Escapism takes the post-rock blueprint of the band’s 2018 debut full-length “How To Let Go” and infuses it with reverberating waves of shoegaze eclecticism and sudden outbursts of savage metal. The widescreen, cinematic expanse of blanket’s sound still remains, however, and rather than neuter their grand ambitions, these additional elements have simply expanded their sonic palette without compromising the grandiose vision that gives blanket their identity.

“Modern Escapism’s” narrative of vicarious modern living is one that we can all relate to. Our increased exposure to modern technology has created a void in our lives, one that we try to fill with online social interactions and voyeuristically peering into the lives of others. But all this time staring at a small screen in the pursuit of instant gratification can be a distraction from us living our lives to their fullest potential. “Modern Escapism” and its accompanying visual stimuli (inspired in part by films as diverse as Requiem for a Dream, Fight Club and The Truman Show) explore this idea of shallow interactions and control through social media that can ultimately lead to a sense of disconnection and lack of validity.  Vocalist/Guitarist Bobby Pook says “Modern Escapism is the culmination of 3 years of writing and creativity. This record has been the one consistent aspect of our lives amidst all manners of life-changing milestones and even a pandemic. We are so happy to finally release this into the world and to observe people react to what we have created.”

Guitarist Simon Morgan elaborates on the album’s theme. “It’s about the obsession that we have with other people’s lives and how that’s pushed down our throats through social media. People document every single facet of their lives and put it up on display in exchange for little dopamine hits when someone ‘likes’ something or comments on a post. Everyone’s living such a public life and everyone can see what everyone else is doing all the time … it’s a strange time we live in.”

blanket spent three weeks in the studio recording “Modern Escapism” (as opposed to the rushed 10-day session on ‘How To Let Go’) with seminal producer Lewis Johns at the helm. The extra time spent shows in the lush instrumentation and sprawling euphoric beats that blanket manage to hit throughout. Thematically, the album may scrutinize the drudgery of modern living, but the music plays paradoxically to that theme with its radiant peaks and euphoric highs.

blanket have also announced two release shows.  These will take place on:

Tickets are on sale now.