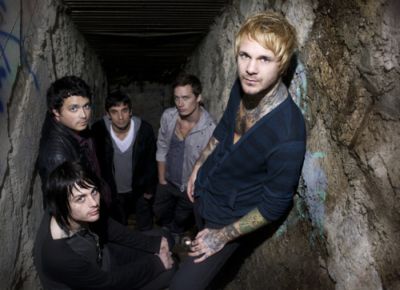 Destroy Rebuild Until God Shows (D.R.U.G.S.), a new project from former Chiodos frontman Craig Owens that also features ex-members of Story of the Year, From First To Last, Matchbook Romance and Underminded, will release their self-titled debut album on February 21 on Decaydance/Sire Records.

The album will be previewed with the release of the new track ‘Mr. Owl Ate My Metal Worm’ from February 11.

Recorded with producer, friend and mentor John Feldmann, the band’s debut is the most aggressive album Owens has made in his career, yet it still retains the keen  sense  of  melody  that  has  helped  him  become  one  of  today’s  most compelling frontmen. “It was so cathartic making this record because music is my form of therapy,” he emphasises. “I can’t wait to get out there and play these songs live because it’ll get all those feelings out.”

From the  electro-tinged  ‘If  You  Think  This  Song  Is  About  You,  It Probably Is’ which alternates between melodic choruses and double-bass-fuelled breakdowns to  the metallically  charged  tracks like ‘Thermacare’, the album is full of creative sonic adventures.

Destroy Rebuild Until God Shows united Owens with other musicians who have undergone similar experiences. “I wanted to put together all of my closest friends and the best musicians I possibly could, and begin a new project where we all could start a fresh,” states Owens. To round out the band, he selected Underminded guitarist Nick Martin, From First To Last guitarist Matt Good, Matchbook Romance drummer Aaron Stern and Story Of The Year bassist Adam Russell.

The band will visit the UK in March for their first headline shows, before returning to the States to co-headline the AP Tour 2011.

Tickets are on sale now, priced at £10 for London and £8 for all other dates. Support comes from Blitz Kids.