Hundred Reasons, Hell Is For Heroes and Cable come together for special November shows

Ten years after the release of their much loved and lauded début album, surrey rock heroes Hundred Reasons have announced two very special anniversary shows, where they will perform ‘Ideas Above Our Station’ in full. What’s more, they are bringing two very special guests along for the ride. 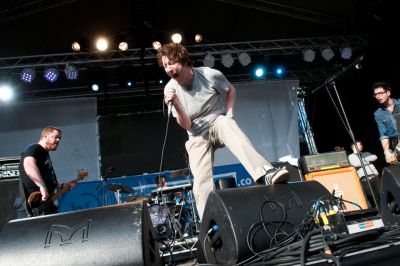 Guitarist Larry Hibbitt explains: “It is with great excitement that we are announcing shows in Manchester and London. As a band it’s important for us to celebrate the 10-year anniversary of IAOS and this is also giving us the opportunity of a proper ending. It’s with further and even greater excitement that we announce that playing before us will be two properly incredible bands: Hell Is For Heroes and Cable. HIFH will be playing ‘The Neon Handshake’ in full. Cable will be playing ‘Oubliette’ (otherwise they won’t be allowed in the building). Everything points to this being a very, very special weekend indeed. See you at the front.”

As Larry points out, Hell Is For Heroes will perform their debut, ‘The Neon Handshake’ in its entirety, as well as other favourites from their career. “We’ve been friends with Hundred Reasons for over 10 years, so when they suggested playing our first records together it sounded like fun.” Says guitarist Will McGonagel. “We are really proud of all the music we’ve made together and look forward to getting together to smash out ‘The Neon Handshake’. The early 2000s were exciting times for British rock music. It was a special time for our bands, who toured together and forged strong friendships. Who knows, maybe one day there’ll be a ‘Shatterproof’ and ‘Transmit Disrupt’ show too!”

Rather more cryptically, Cable revealed their return to live performance with the following statement: “Recent calculations (using science) indicate that art-rock constellation Cable will make an extremely rare solar-transit visible only from the points of Manchester and London during the last moon of November 2012. It will be a one-off occurrence (not visible again until 2145). Observers are encouraged, but advised not to look directly at the astral-bodies during the event.”