Multi-platinum rockers Staind have announced their first UK tour dates since January 2009. The band will headline four shows in the UK in October, as part of a brief European visit hot on the back of the release of their self-titled seventh studio album. 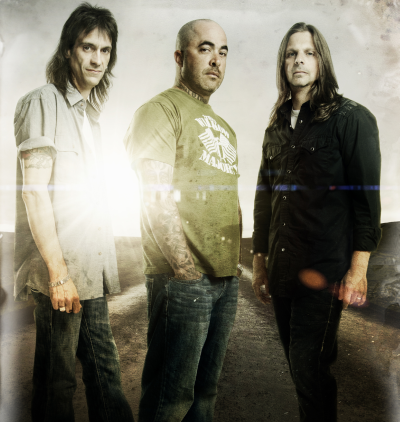 Produced by Johnny K (Disturbed, Machine Head) and mixed by Chris Lord-Alge, the eponymous record stands as Staind’s most intense and powerful work to-date. Lead single ‘Not Again’ boasts pummeling guitars and an incisive, infectious hook. “That was born out of the frustrations of making this record,” exclaims singer/songwriter/guitarist Aaron Lewis. “It came out of being really pissed off, and you can hear that in my voice.” Meanwhile, ‘The Bottom’, featured on the ‘Transformers: Dark Side Of The Moon’ movie soundtrack, twists through a haze of grinding guitars, bass, and drums. With clean guitar and singing, ‘Something To Remind You’ is sparse and elegantly brutal, while ‘Paper Wings’ burns with raw rage. The gritty groove of ‘Wannabe’ features legendary special guest Snoop Dogg. The curious can download a free MP3 of new song ‘Eyes Wide Open’ online at: http://www.roadrunnerrecords.co.uk/staind/mp3/.

Guitarist Mike Mushok sums up the band’s return to form best. “It’s like ‘Dysfunction’ 2011,” he smiles, referring to their previous 1999 release. “The music goes back to where we started, but there’s still melody. We were ready to make an album that was heavy from beginning to end. It was time.”