The Rapture have announced the release details for their long-awaited third album ‘In The Grace Of Your Love’ on September 5 in the UK and September 6 in the US through DFA Records. Check out the cover art here. It features an unbelievable old B&W surfing picture of frontman Luke Jenner’s dad. 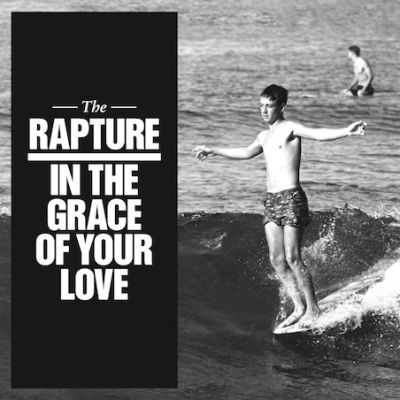 The release of ‘In The Grace Of Your Love’ marks the dawn of a new chapter in the bands history and a welcome return to DFA Records family, having re-signed with the label that released some of their most acclaimed early singles, and whose founders James Murphy & Tim Goldsworthy produced their debut album ‘Echoes’.

Together with French producer Phillipe Zdar (Phoenix, Beastie Boys, Chromeo) they have crafted and shaped a bold & euphoric album that sounds definitively & distinctly like The Rapture and no one else. Here through the course of its eleven tracks, you can immerse yourself as waves of lyrical optimism & introspection crash between angular guitars & pulsing synthesizers, pounding drums & into sweet rhythmical lullabies. This is the sound of The Rapture re-engaged and revitalized with a voice as clear as they ever had.

The full tracklisting is as follows:

‘In The Grace Of Your Love’ was recorded at Motorbass, Paris and Gary’s Electric in Greenpoint, Brooklyn.

To coincide with the release, The Rapture will embark on their first full European tour in several years later this Summer.

Tickets are available from here: http://www.gigsandtours.com/?a=the+rapture&site=therapture

For more information visit the official The Rapture website.