Vocalist of Oxymorrons, Demi “Deee” takes some time out for us (while on tour) to talk us through their inspirations and ideas! 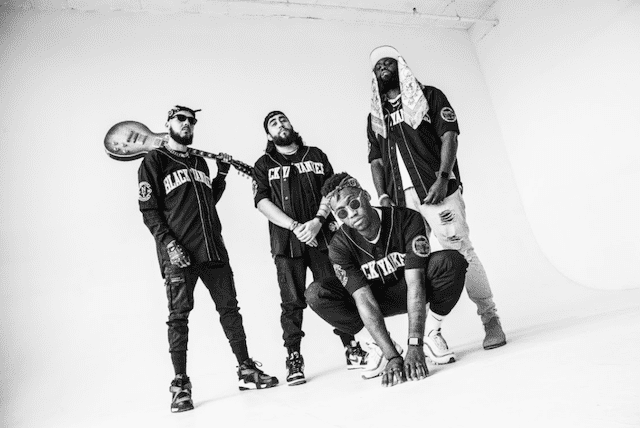 S] Hey guys, thanks for your time – how are you doing today?

AMAZING. On tour with Grandson and Royal and the Serpent at the moment and it’s been bonkers. New single “Think Big” just came out and is moving dot com. Great shows, amazing receptive fans, and a whole lots of thrashing on stage.

Today we finally had an off day so we decided to kick it and cook and play some pool in the air b&b. Quick fact: most of us are not very good at pool lol. Regardless, excited for the second half of this run and to play some more dope-ass shows.

S] How do you define success as a band now?

Good question. I think for a little while for the lot of us it was about being the biggest band in the world and sharing our music with as many people as possible (which is slightly still the case). But more recently success for us is seeing what our music has done for people. Representation in the rock space is SO important. To have BIPOC kids come up to us after a show and say “I see myself in you” or “I never thought I could do something like this” is so enormously heart warming. To have the anime fans, the video game enthusiasts, the outcasts, the out of the box kids feel like they can truly be themselves with us and connect with us is an amazing feeling. It’s the spark of change in the music space we want to have with no gatekeeping or boundaries and fans who can express their individuality through our individuality.

S] For me, the band have an overriding message of positivity and uplifting energy – ‘Definition’ and ‘Think Big’, for example, is that a part of the band’s mission statement, to bring that energy?

Absolutely! We bring high-octane energy out the gate to every live show, which those two records capture so well. We use our music to express all the facets of our lives which means not just moments of resistance and struggle, but also the positive and celebratory moments of life. We’ll always keep it super real while having fun doing it.

S] How do you look back at a track like ‘Justice’ right now?

We simply don’t look back on that track. “Justice” will always feel and remain in the present. The topics of that song were written and recorded before George Floyd and the world decided black lives were worth standing up for. Police brutality and systemic racism are still rampant in our society – just because some police officers finally got sentenced to some jail time for murdering innocent lives in no way mean things got better. Laws need to be re-written. And until then, “Justice” will always remain in our present and our future.

S] How would you say you have changed and developed as performers, since the beginning of Oxymorrons, up until this point?

We changed and developed a lot as performers. When we first started we would just come out hard hitting 10/10 that’s it. Later we learned to give emotional waves of the music. We went from just playing music to giving you a experience. When you come to a Oxymorrons show you feel like you are part of the band, two vocalist , a guitarist, a drummer and you guys .. the crowd. I guess technically we are a 5 piece lol.

S] What is your message for fans in the UK?

To all of our UK fans we love ya! Currently we have the best pen pal relationship, but we can’t wait to meet you all in person. Let’s continue to build this wonderful music family from NYC to the UK. We will come rage with you very soon .

S] Is there anything else you’d like to plug?

Be on the look out for a lot more music, touring and festivals!!! 2022 continues the rise of Oxymorrons  Love ya!!!!