Black Stone Cherry and Roadrunner Records are pleased to announce that their third album, ‘Between the Devil and the Deep Blue Sea’, is due out May 30, 2011. 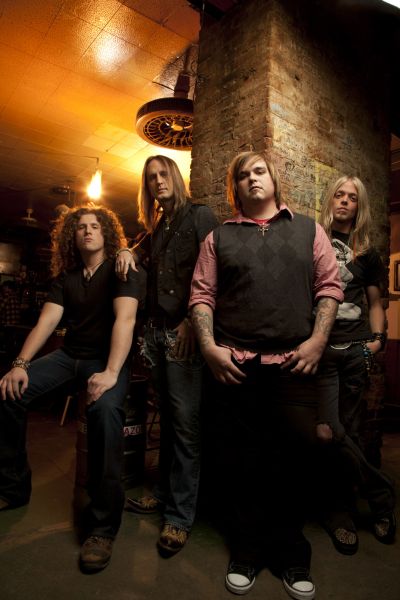 Kentucky’s Black Stone Cherry, comprised of vocalist Chris Robertson, guitarist Ben Wells, bassist Jon Lawhon, and drummer John Fred Young, are a band that create both timeless rock ‘n roll and new sounds.  While the band’s last record, ‘Folklore and Superstition’ was a tribute to brotherhood and history, the new album is the summation of a year in the life of the band, every emotion, triumph, loss, romance, with everything in between.

This is the first time Black Stone Cherry have not recorded in the South, this time taking up residence in Los Angeles to work with producer Howard Benson. The new surroundings allowed them to strengthen their relationships as both band members and friends, which they feel is a detail that sets ‘Between the Devil and the Deep Blue Sea’ above previous recordings. The music on this album relates back to the early days of Black Stone Cherry, when they were a bunch of guys just making music for the hell of it.  The band admits “When we first began writing music, we hadn’t travelled very far out of our home state of Kentucky. Now, ten years later, we have travelled the world and experienced things we never imagined we would.”

First single ‘White Trash Millionaire’ pairs Robertson’s soulful delivery with the infectious rhythms of his fellow players. Sure this is Southern rock at heart, but the concept is universal – just take what the world gives you and make that work. “This album is the culmination of all of the everyday ups and downs life throws at you,” says the band. “Sonically, you’ll hear some of the meanest sounding guitar riffs we’ve ever laid down, and at the same time, you’ll find ballads that will tug on your heartstrings.  We wanted the album’s intensity to match that of our live show.  We’re very proud of this album and excited for our fans to hear it!”

To celebrate the release of ‘Between the Devil and the Deep Blue Sea’, Black Stone Cherry is participating in an ongoing partnership with Evan Williams Kentucky Bourbon whisky throughout the USA. Not least, the promotion brings 450,000 Black Stone Cherry branded bottles to shelves nationwide throughout June.

Black Stone Cherry also has quite the busy spring, with April and May USA tours with Hinder and Alter Bridge on the horizon.