Following the news that the 2010 edition of Birmingham’s acclaimed annual Supersonic Festival will be headlined by Swans. The festival curators Capsule are hugely excited to announce the second headlining act, Godflesh. Acclaimed by many as founders of the industrial metal movement, Godflesh will be returning to their Birmingham roots to play the band’s first UK show in over 10 years. 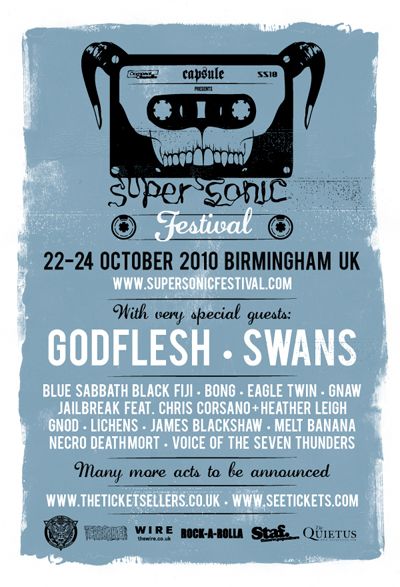 Featuring band members Justin Broadrick (ex-Napalm Death and Head of David) and Benny Green (ex-Fall of Because), Godflesh will be bringing their crushing, apocalyptic sound back home to Birmingham in their first UK show since they disbanded in 2002.

Broadrick comments: “We cannot even recall specifically the first Birmingham Godflesh show. Oddly, we think it was supporting Suicide in 1988, just after the release of our first Mini LP on Swordfish, the record label of Birmingham’s best record shop. So it’s only natural that the first Godflesh UK show in its original form in over 10 years, comes home to its birthplace, and for whom better than Supersonic, the organisation responsible for keeping Birmingham on the map with underground music, be it metal or otherwise. It is with great pleasure that Godflesh returns to its roots.“

This performance by Godflesh forms part of a series of line up announcements for Supersonic 2010 with many more exciting acts and artists to be revealed in the coming weeks and months.

Moving from its previous July weekend date to October from 2010 onwards, Supersonic will once again take place in and around the Custard Factory in the heart of Eastside, Birmingham, utilising converted factory warehouses and art galleries and offering up-close, intimate settings to showcase some of the most exciting music out there. Capsule‘s passion for genre-bending sound and performances is at the heart of all their events – there are not many places where you can listen to funeral doom, prog, folk, avant jazz and grindcore in one weekend.