With his own new label, Hank3 Records, and the sense that he has thrown off the chains holding him back creatively, Shelton Hank Williams III, aka Hank3, is coming out swinging this year with the release of four records. 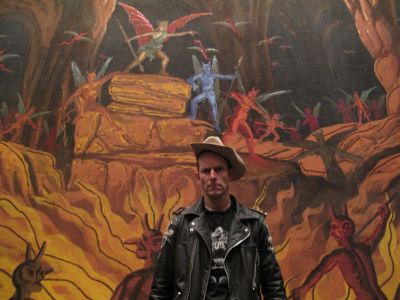 The unprecedented launch, in a distribution partnership with Megaforce Records (MRI), features a broad range of music that bridges more than one head-thumping genre – a familiar theme that true Hank3 fans have embraced for years.  ‘Ghost To A Ghost’/’Guttertown’, a double-album set, is a straight-shooting country collection, flavoured with Hank3’s trademark hellbilly sound, and heavily weighted with Cajun influence (especially on ‘Guttertown’) and an ambient, lonesome mood – and a few very special guests.

Two more releases are ‘Attention Deficit Domination’ and ‘3 Bar Ranch Cattle Callin’ – intensely metal-driven records on which Hank3 plays all instruments. ‘Attention Deficit Domination’ is a pressure-dropping, doom-rock statement that has been anticipated by his hardcore fans for years, and Cattle Callin explores a new mind-bending cattle-core sound, featuring Hank3’s speed-metal woven in and around actual cattle auctioneering.

All three projects were recorded at The Haunted Ranch, Hank3’s home and studio that lies on the outskirts of Nashville – a fitting place since the town has never really known what to do with this grandson of the American icon. He finally parted ways with Curb Records on January 1. “I have musical freedom. I’m able to say ‘Here’s my record’ and I don’t have to go through a million different channels just to put out a song,” he says. “It’s all me now.”

Hank3 wrote the lion’s share of the songs that appear on the 41-track ‘Ghost To A Ghost’. The players are Andy Gibson on steel guitar and banjo, who also aided in its recording, David McElfresh on fiddle and mandolin, Zach Shedd on standup bass, Daniel Mason on banjo, super-picker Johnny Hiland on guitar, Billy Contreras on fiddle, and Rory Hoffman on accordion.

Guest appearances include the mythical Tom Waits on the haunted ‘Fadin Moon’ from ‘Guttertown’ and on the ‘Ghost To A Ghost’ title track, Alan King of Hellstomper, Les Claypool of Primus fame and beyond, Dave Sherman, Troy Medlin and Hank3’s dog, Trooper.

Cuts such as ‘Guttertown’, ‘Ridin The Wave’, and ‘The Devil’s Movin In’ on ‘Ghost To A Ghost’, and ‘Goin To Guttertown’, ‘The Low Line’, and ‘I’ll Save My Tears’ on ‘Guttertown’ highlight both the excellent musicianship on the records, and Hank3’s unmistakable, confident vocals.

‘Attention Deficit Domination’ allows the listener into Hank3’s crunching, metal world of the heavy and the slow, complete with his renowned, fundamental percussion. The nine tracks hardly allow you to get up from the floor. With songs such as ‘I Feel Sacrificed’ and the tormented ‘Livin Beyond Doom’, Hank3 works a ground somewhere between devastation and high theatre. “Both ‘A.D.D’. and ‘Cattle Callin’ are very intense. It’s very manic,” Hank3 says. “It’s hard to follow, even for the guys I play with. I’m playing everything on these two. It’s very complex.”

There are 23 tracks on ‘Cattle Callin’, featuring Hank3’s driving, formidable guitar attack, with instrumentation build around the auctioneering and, in some cases, his own higher-register vocal treatment laid over the top. Metal fans will notice some tongue-in-cheek humor with titles such as ‘Heavy Cattle’ and ‘Angus Of Death’. Also, fans of bluegrass will love the banjo-driven ‘Cattle Callin Lonesome Blues’, featuring Mason. “I was raised around it [cattle auctioneering] and it’s pretty amazing how fast these guys are,” Hank3 says. “Hip-hop has looped auctioneers. Bluegrass has messed around with it a little bit. This has never been done in the heavy metal world.”

The October release of all three projects represents a new birth for Hank3, and he’s happy to have the chance. “Megaforce Records has helped me with my vision to do something that’s never been done before,” he says. “They’re handling my distribution, and I wanted to flood the market and do everything different. I wanted to come out of the gate strong. I’m opening up the mind a little bit and bringing some different styles together.”