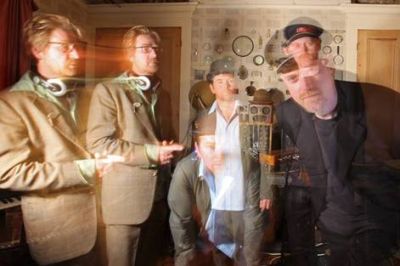 Formed by composer/producer Jono Podmore, electronic musician Paul Conboy and fine artist Mark Hill, Metamono follow the dictates of their uncompromising manifesto: barring themselves from using digital sound generation and processing, rejecting overdubs and microphones, and informing their unique approach to music making. Their instinctive, improvised compositions are createdusing a selection of pre-used, borrowed and handbuilt vintage analogue synths and ring modulators, enhanced by the ethereal sounds of a theremin, a siren and a valve radio.

Previous releases, ‘Band Theory’ and ‘C15H14O6’, are limited editions available on cassette only. Paul Conboy (Bomb The Bass) who has built much of the instrumental equipment himself, says “Vinyl was always the ultimate format for us, although we’ll continue to make cassettes as they suit the music both aesthetically and in terms of audio quality.” The band has an impressive pedigree, bringing a wealth of experience from both the art house and the moshpit. Jono Podmore is a composer and producer who, since his early days working with artists such as The Shamen, has gone on to release music in partnership with Irmin Schmidt of German experimental rock group Can. After two decades of working at the cutting edge of music technology, he’s disillusioned with the expediency of much contemporary music. “Being able to download just about any sound imaginable is liberating in one way, but I’ve found it makes me less creative. Making purely electronic music while rejecting digital technology imposes limitations, but then actually forces you to be more imaginative and resourceful. We have to make every sound and of course that feeds into the rest of the aesthetic.”

That aesthetic is evident at their live performances but also on ‘Tape EP’. This is techno-pop from another planet of the imagination, its regular and irregular patterns exuding a rounded warmth, a dimensionality missing from so much of today’s electronica with its brittle, brand new, built-in obsolescence. This sort of durability doesn’t come first-hand. “It’s all found; radios have been unearthed, instruments and boxes are happened upon,” says Hill, an artist with an ecological manifesto of his own and whose anti-consumerist philosophy is central to Metamono’s ethic and aesthetic. “One of our ruling principles is, if you don’t have to buy something new, just don’t.” Except of course for Metamono’s ground-breaking new release, which might seriously challenge your conception of music.