We recieved the update earlier from Unter Null. it is very sad news and we hope that we can be of some support to Erica and her family.

Please read this and do what you can to support this artist who has recently lost her studio and avoided serious injury.

I hate to do this because I feel like an asshole but as my entire family is currently totally screwed and living out of a hotel and trash-bags:

if you can donate anything:

please either mail me at [email protected] 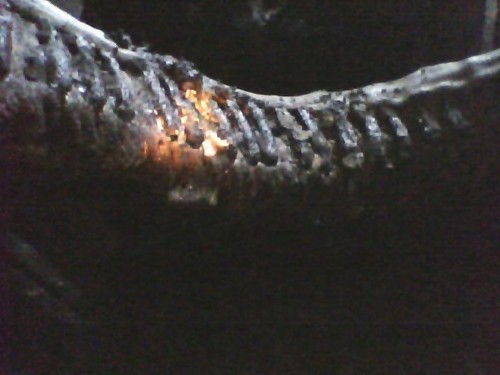 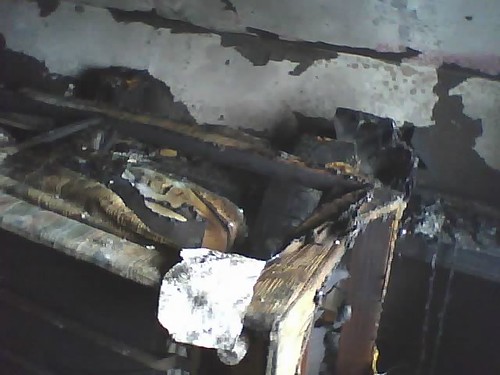 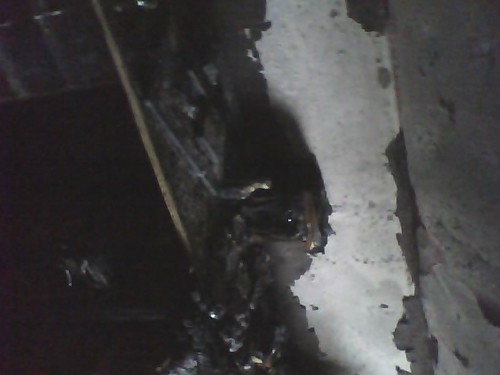 I never have been in a fire and I am terrified for this to ever happen again.

Currently, I am in a hotel room with my mother, father and sister. We found our cat earlier this evening hiding in the tool shed. Our dogs are safe. No lives have been lost.

Current situation: My entire room used as a music studio is gone. It is completely black. My flat-screen monitor is melted into my keyboard. My M-Audio keyboard is, as you see in the post below, some warped Dali-esque thing.
((could now make an art project out of it)

More details as to what I remembered happened:

I went to bed at around 3:30 AM. I took 2 Benedryl as I do every night because I have a problem sleeping. I probably dozed off at around 3:45. I remember putting out the candles that I had lit in my studio previous to going to sleep.

My bed is located right outside the door of my studio ; as I like to separate work/music from bedtime.

In my sleep I was having a waking dream of it being very warm and hearing things pop and crackle and things crash. I think I slowly came to, most likely because of the heat.
The second I opened my eyes I think I realized something was very very wrong.

I flew out of bed, looked to my right (where the door to my studio is) and saw my door ajar with thick black smoke pouring out from the door. It was EXTREMELY hot. I have never felt such heat in my life.

Still in a half-sleep state, half-dream state ( I did not realize I was awake) I tapped the door with my finger to push it open a bit and I was met with a gust of heat, smoke, and flames in my face.

I pounded on my sister’s door which was directly across the hall from my studio and yelled ‘WAKE UP GET OUT” and ran down the stairs still screaming “OH SHIT OH SHIT OH SHIT”
My father came racing out of my parents’ room at the bottom of the stairs compeltely oblivious as to what was going on. He went racing up the stairs and I heard him shout “GET OUT!!!!!!!!” to my sister. My mom came racing out of my parents’ room next and had no idea what was going on.
All I could say was ‘FIRE FIRE BAD FIRE FIRE FIRE FIRE CALL 911! CALL 911! CALL 911!!”

She raced to the phone and dialed and got connected as I ran to the sink and filled a 4-cup measuring cup with water. The water wasn’t pouring fast enough into the cup. I had no idea what I was doing at the time, I was at then going on instinct and adrenaline. I raced back up stairs, which was fucking stupid of me, (my sister and dad were now downstairs) and I tried to approach my room. The heat, the smoke, the air was so heavy and hot and dense.. I can’t even describe it. It suffocated me and I became dizzy and wanted to sit down. I made it to the door of my studio, opened the door, and the rush of hot air in my face was overwhelming. I threw the cup of water into the room and ran away immediately because the heat and smoke was unbearable.

I got back downstairs coughing and hacking and couldn’t breathe and fell on the ground. My mom was still on the phone with the fire department still trying to explain the situation, and she had been on the phone for at least 2 minutes then (perhaps because my sense of time at this point was in slow motion) and I was just screaming “IT’S BAD IT’S BAD GET HERE NOW IT’S BAD” and she kept answering fucking QUESTIONS.

Guess who the first officer to arrive on the scene was ? YES! The jackass whom I currently have a lawsuit against! He gave me this horrible, demeaning look and said “where is the fire?” and I said ” upstairs”

My mom, dad, sister, and I got out of the house. We still didn’t see any fire trucks. I looked up at the window to my studio and saw smoke and flames billowing out of the window – the glass had burst.

It was so fucking surreal. Seeing the house I grew up in, seeing the room I’ve lived in for the past 23+ years on and off being engulged in fire. It was also extremely terrifying to see the red flickering of flames reflecting off the snow on the roof.

I looked down the street and saw a fire truck approaching. The snow had been so bad here lately that they were having problems getting down the street. By this point, the smoke coming out of the room had gotten worse and blacker and thicker and I was near biting my tongue off in distraught and absolute non-control of the situation.

Eventually the fire truck arrived in front of our house.

Then another fire truck arrived.

The police (there were 8 cars there now of police – I do believe the entire POLICE DEPARTMENT – bored much?) were parked all around the block and street and blocking our street. It’s now 5:20 AM.

I am outside in pajamas, no socks no shoes standing in snow. My parents and sister were smart enough to grab their important belongings (purse, shoes socks etc) and were outside with me.

One of the police officers yelled at us “STAY AWAY FROM THE FUCKING HOUSE” even though we were all EASILY 7 yards from our house. They were being very rude.

I couldn’t feel my feet at this point, my father had me get in his car and turned on the heat.

So at that point we are all sitting (all 4 of us) in my parents’ car in our driveway, watching fucking helplessly as the fucking firefighters weren’t DOING SHIT but STARING UP AT MY STUDIO.

I counted this time on the clock how long it took the firefighters to actually hook up the hose and it was 10 minutes.

No one had gone into the house yet. Everyone was outside. There were at least 20 firefighters milling around outside our house. I don’t know what they were doing but I was seriously pissed because nothing was happening.

Finally they hooked up the hose and started shooting water from the yard of our house into the window of my studio. All we could see then was more black smoke… and more… and more… and it was not getting better.

The cops came to our car and told us to get out of the driveway. We pulled out and parked in the street right by our house, where we had a full view of our house.

For a minute it seemed like the smoke coming out of my studio room had died. Then I saw about 10-15 firefighters go inside our house.

About 2 minutes later, I saw massive flames shooting out the window of my studio, easily 20 feet. I lost it at this point and just started bawling. I figured that our house was gone. I figured, my cat was still in there. I KNEW that everything in that room was just fucking gone (it is).

The flames kept coming out. It was really surreal, it was like from a horror film.. I don’t know what my state of mind was then but I just remember repeating “it’s a nightmare it’s a nightmare” because I thought i would wake up, this wasn’t happening.

About 10 minutes passed and the flames were gone. There was smoke EVERYWHERE. I could smell it in the car.
(Well, I smelled like burnt plastic)

One of the police officers came over to my car and asked who was closest to the fire. My dad answered for me because I was shaking badly at this point and could not speak and said that my bed was right outside the room. He took one look at me and asked why the paramedics hadn’t seen me. I said I felt fine. Except of course my voice sounded like I’d swallowed acid. Also I didn’t realize at this point that my eyebrows had been burnt off and the ends of my hair had been singed severely.

The fire is out.

One of the firefighters twisted his ankle on our stairs.

2 1/2 hours after everything started I got seen by the paramedics. They held up a mirror to me and it was fucking awful. My face was blotchy red and my hair was really badly burnt. No eyebrows.

One of the other firefighters came up to me and told me I was a “hero” for closing the door to the studio. I said i wasn’t a hero I just thought it would keep the fire contained to the room.

Either way….. it kept the fire contained only to my studio.

The rest of the house is fine except for major water damage.

There is no power in our house.

Thus we are at a hotel for the next week.

I was taken via ambulance to the hospital where I was checked out, done numerous tests on, blood drawn, oxy mask etc.

One lady came in and wanted to give me this treatment she said would open up my airways.

She got this face mask ready and it was BILLOWING SMOKE. (later I find out it was gas or something) … I completely lost it and started heaving and ended up vomiting because I was so beyond myself. I didn’t need that. She started to apologize profusely and I felt badly for her because she probably had no idea it would set me off like that.

They gave me Ativan at the hospital because I was not, uh, sedated. I passed out. I woke up at 12:00 Noon after having arrived probably at 6:30 AM.

My parents had come by to see me at one point but I don’t remember much because I was in and out. Supposedly my trachea is burnt. I’m taking some mediation every hour to help with it.

My boss asked why I was there, I said because I am Not Dead.

I am not dead.

My life had changed forever because of this.

I don’t know if I will ever sleep again. Today at work I have been having continual playbacks of the entire event, mostly of waking up and realizing as to what is going on.

Waking up and what I could have done different.

Not waking up and my whole family dying

Our house burning down

This has been a crude wake-up call to me and my priorities.

The sad thing is… last night, Xmas, my next Unter Null album was FINISHED.

Now my PC is melted.

Here is a short list of all the things I have lost in the fire:

COMPUTER (don’t know where to start with this, PC, AMD 64, 3 harddrives, 15 years of audio work on there)

Various furniture which now I don’t care about.

Please show your support in anyway that you can.