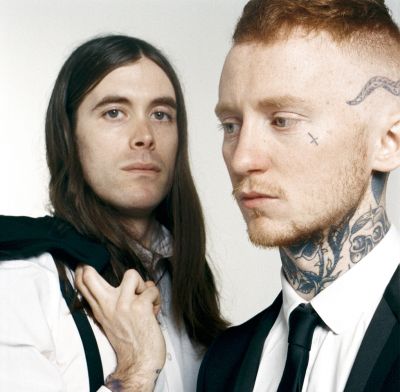 ‘Bury My Bones’ will be released as a free download and is available at www.therealpurelove.com. They have also released the video for ‘Bury My Bones’ which you can view on their website too.

Pure Love – the name is taken from a song by ’70s jazz-rock fusionists Mahavishnu Orchestra, Sapphire Bullets Of Pure Love – came into being quickly and instinctively.

Singer Frank Carter and guitarist Jim Carroll got together in their adopted hometown of New York at the beginning of last year having decided to form their perfect rock band.

Pure Love are currently completing the finishing touches to their highly anticipated debut album with legendary producer Gil Norton. Produced in Brooklyn, where both Frank and Jim reside, the debut will be released in October, on Vertigo Records.

Pure Love recently announced a show at London’s Scala on May 29. This follows their sold out riotous live debut at London’s Bush Hall on Valentine’s Day.

This will be another not to be missed gig. Tickets are now on sale and available on: http://www.kililive.com/artists/pure-love.