British hard rock legends Saxon will release their 19th studio album titled ‘Call To Arms’ on May 23, 2011.  Recorded at Chapel Studios in Lincolnshire, UK and Brighton Electric Studios in Brighton, the 11-track album was co-produced by singer/songwriter Biff Byford and Toby Jepson (Little Angels). Featuring Byford on lead vocals, Paul Quinn and Doug Scarratt on guitars, Nibs Carter on bass and Nigel Glockler on drums, ‘Call To Arms’ is a confident embrace of the aura and writing values from their early years, married to a modern Saxon sound. 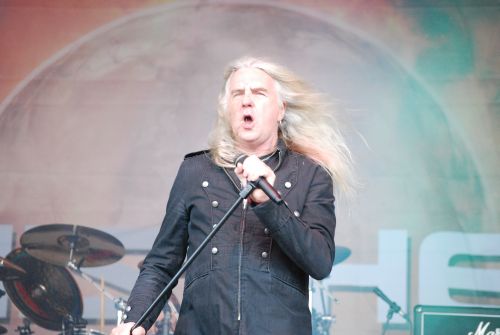 “This is probably the best album we’ve written and recorded in the last 20 years,” states Biff Byford unapologetically, “I know a lot of bands say that, but ‘Call To Arms’ really does feel like that to me. It’s the perfect embrace of our past with a great modern edge.”

Between the riffs of ‘Hammer Of The Gods’ all the way through to ‘Ballad Of The Working Man’, Saxon also found time to invite fans to sing on the nostalgic stomp of ‘Back In ’79’.

“We put something up on our website 24 hours before recording the track in Brighton, and funnily enough we had exactly 79 people show up on time to sing on the song. It was a fantastic result which is a direct tribute to ‘Denim & Leather’ where we did the same exact thing.”

There is also a guest appearance from Rainbow/ELO/Ozzy Osbourne and Deep Purple keyboard legend Don Airy on ‘When Doomsday Comes’. “We were at the American embassy in different lines queuing for our visas and by the time we’d got them, Don had agreed to come and play on the song,” says Byford.

It will also feature alongside the track ‘No Rest For The Wicked’ in the forthcoming movie ‘Hybrid Theory’, a sci-fi thriller which follows a group of British soldiers who find themselves in a life or death battle with an enemy far beyond their wildest nightmares.  The film is directed by James Erskin who made ‘One Night In Turin’ about England at the World Cup in 1990.

“We’ve done our darker albums, our full-on metal albums, we have been to those spaces and experimented with them and people came on the journey with us,” says Byford, “and with ‘Call To Arms’ you have the culmination of those 10 years and the 20 years before it. I love this album. I love the songs. I love the sounds.”

3 – Surviving Against The Odds

10 – Ballad Of The Working Man