Shinedown have released an e-book companion to their brand new ‘Amaryllis’ album, titled ‘For Your Sake: Inside the Making of Shinedown’s Amaryllis’. The first-ever e-book by a major recording artist created using Apple’s just released iBooks 2 platform, ‘For Your Sake’ is available online now at Apple’s iBookstore. 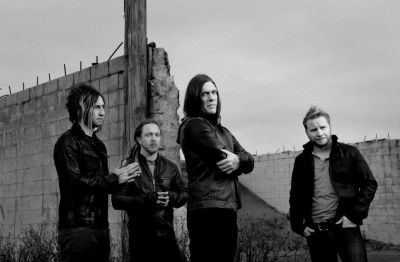 The project is an interactive experience that tells the official story of the band’s new release, with over 75 pages of words, never-before-seen photos, videos, and much more. Written by rock journalist Jonah Bayer and produced by Atlantic Records in the US, ‘For Your Sake’ features four sections of exclusive content, including an exploration of the creative and recording process that led to ‘Amaryllis,’ a revealing look at the band’s interpersonal and artistic dynamic, a track-by-track dissection of the album from frontman Brent Smith (including high-quality video commentary), and a fully immersive breakdown of the album’s complex and evocative artwork by Atlantic Records’ Creative Director David Harrigan. Designed especially for iPad users, ‘For Your Sake’ offers fans a one-of-a-kind experience to enhance the band’s new music.

The band return to Europe for the summer festival run, including an appearance at this year’s Download Festival on Sunday, June 10.

‘Amaryllis’ sees Shinedown teaming up once again with multiple Grammy Award-winning producer Rob Cavallo (Kid Rock, Green Day), who previously collaborated with the band on their ‘The Sound Of Madness’ album. The tracks were recorded at Cavallo’s Lightning Sound studios outside of Los Angeles and a pair of Hollywood landmarks, Ocean Way Recording and Capitol Studios.