The Vaccines and The Horrors to co-headline new, non-profit festival Chazzstock

Chazzstock is a brand new music festival set up in memory of the much-loved, young musician Charles Haddon. Charles, otherwise known as Chazz, was the lead singer of cult synthpop band Ou Est Le Swimming Pool and sadly passed away in August 2010. 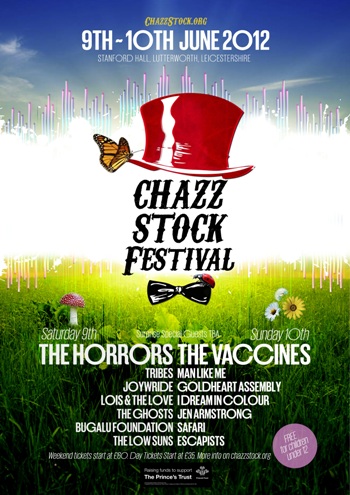 The festival takes place in the grounds of Stanford Hall in Lutterworth, Leicestershire on the 9-10 June 2012. Bands such as The Vaccines, The Horrors and Tribes will be performing over the weekend alongside some new talent, with more special guests to be announced soon.

Charles’ dream was to hold his own festival in his parent’s back garden, which he always said he would have named Chazzstock. Now family and friends have banded together to create the perfect festival just as Chazz himself would have seen fit.

Chazzstock have also been inviting unsigned bands to put themselves forward to play at the festival, to encourage and support young and upcoming talent. All proceeds from the festival will go towards The Prince’s Trust, a youth charity that helps change young lives.

Tickets start from £35 for a day pass and are available from here.