The Wolfmen ready new album, ‘Married To The Eiffel Tower’

The Wolfmen’s prolific 2010 sessions with The Dandy Warhols’ Courtney Taylor-Taylor form the nucleus of band’s second full-length offering, ‘Married To The Eiffel Tower’. The record shall be released through Howl on August 22. Included on the release is The Wolfmen’s highly regarded 2010 duet with Sinéad O’Connor, ‘Jackie, is it my Birthday?’ The single won massive radio support from the likes of Dermot O’Leary (BBC Radio 2), Don Letts (BBC 6Music) and Lauren Laverne and is heralded by Rolling Stone as “rock rage wrapped in an ethereal halo”. It also features a cover of a long lost (and unreleased) Velvet Underground number, remixed with a “vibey, almost Primal Scream feel” that has the official Lou Reed seal of approval. 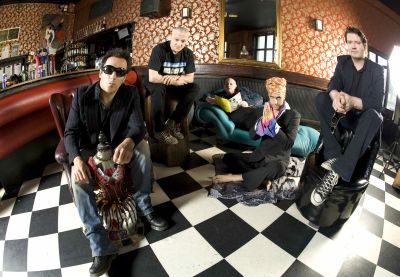 The Wolfmen’s first projects were soundtracks for Bravo TV’s acclaimed ‘I Predict A Riot’ and for two hitherto-silent early 1990 fetish films for the ICA/MoMI’s inaugural Fashion in Film Festival before the early Wolfmen records were released through Damaged Goods. These included a mixture of limited edition EPs and vinyl singles, all of which sold out and won huge praise from Jonathan Ross (BBC Radio 2), Mark Lamarr (BBC Radio 2) and Phil Jupitus (BBC 6Music).

The band’s debut album – ‘Modernity Killed Every Night’, mixed by Alan Moulder (The Killers, U2, Arctic Monkeys, Smashing Pumpkins) was released in 2008 and was described by MOJO as “steeped in the space-age glam boogie of Bowie and T-Rex with a bit of Iggy-in-Berlin thrown in.