Guitarist Robert Westerholt is stepping down from full-time live performance for Within Temptation and will be taking care of the band’s production and song-writing in the future. 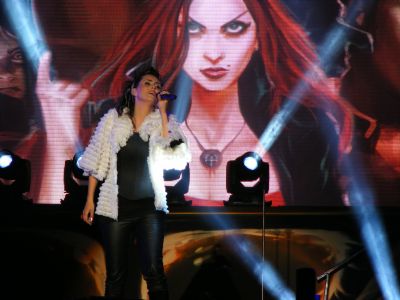 Sharon den Adel says: “As you know in recent years we have been blessed with the birth of three children. Since then, not only our kids but also Within Temptation has been growing fast and we are touring in more countries than ever before. To be able to fulfil the needs of our children but just as much the needs of the band for now and also in the future, we decided Robert will step down from touring live (except for the occasional show). With this change we can give stability to our children and from the home studio Robert will have more time writing new music and developing new creative ideas for the live show, the comic, and future movies.

What makes the decision easier is the fact that Stefan Helleblad is willing to take Robert’s place in the band on stage. Stefan has been working with the band behind the scenes for some years. As a sound engineer he was involved in the production of our latest three records. Next to being a great sound engineer, mixing engineer, and producer he is also a very gifted guitar player. On our latest album ‘The Unforgiving’ you can already hear him playing some special guitar parts. His first show will be on the 21st in Heerhugowaard. So this is not a goodbye but a new step, or actually two steps, in a very exciting, new, and inspiring time for our band. We hope you keep joining and enjoying this adventure together with us and our paths will keep crossing each other!”

Within Temptation have a sold-out UK tour in November.

For more information visit the official Within Temptation website.