Wrestling News: Is Cody Rhodes really about to hang-up his wrestling boots? 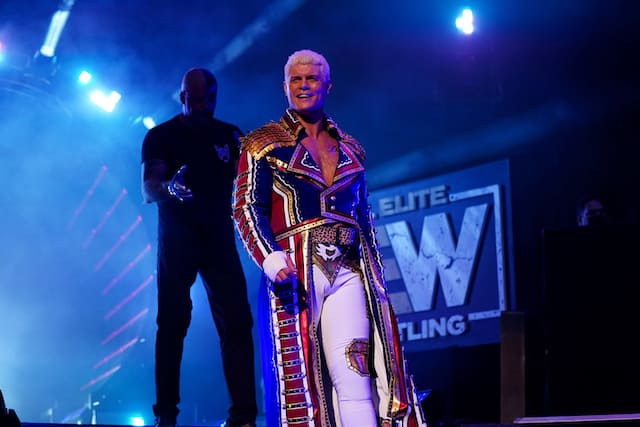 His voice cracking, eyes filling up, he gave the speech we’ve heard many times from wrestlers about to step away, either as a storyline or for real. Cody, the son of the late American Dream Dusty Rhodes, spoke of his love for the fans, of achieving his dreams and of making room for new faces and new stars in the company he helped to found.

He took off one boot, symbolically placing it down in the centre of the ring. He grabbed the other but was rudely interrupted by a metal crutch to the spine from his dastardly opponent as they went off the air. Wrestling!

Was this really the end (or at least the beginning of the end) of Cody ‘s in-ring career? Prior to the match, Soundsphere joined Rhodes on a media call, where an emotional new father hinted the passing of the torch may not be too far away.

“My goals in wrestling have changed so much. When I got into wrestling, I just wanted to win the title they took from my dad in Madison Square Garden,” the 36-year-old said. “And then time just zoomed forward and the goals presented to me then were astronomical. To be part of The Elite with Matt and Nick [Jackson] and Kenny [Omega] and Hangman [Adam Page’ and then to have Chris Jericho and Jon Moxley and Tony (Khan) provide the biggest burst of life into wrestling in two decades…

“Gosh, I almost feel foolish making new goals for wrestling because so much has been done with this team.”

It’s here, Rhodes gets emotional. He added: “This is going to be maybe a sappy answer, but I think before it’s all said and done – and I don’t know when that is because between you and I’m pretty tired right now – I would like my daughter to know that I never gave up at an industry that can really chew you up and spit you out, I never gave up.

“I think that’s my biggest goal. I had the best dad in the world and… sorry… I just want to be that for her.”

Whether Rhodes’ very genuine emotion here was part of the storyline in setting the stage for the events on Dynamite remains to be seen. However, wrestling lore is such, that there’s at least one more big match to prepare for and wrestling retirements are rarely forever.

Elsewhere, within the call, Cody addressed rumours AEW is about to sign free agents like Brian Danielson and CM Punk. While he wouldn’t get into specifics, the former TNT Champion made clear he’s all in favour should company president Tony Khan open-up the purse strings.

He said: “You can’t wish away talent. If there’s a free agent out there that can move the needle and be something significant for us, I, personally, think you go after them. Does that change the landscape of the show and the roster? For sure, but that is an area where – as much as things can get personal – it is business.

“There’s a lot of AEW programming and room has opened-up, but there’s not incredibly that much more room. If you’re asking me, one of the EVPs of the company, I say the more the merrier.”

When asked earlier about the arrival of Malakai Black to AEW, Cody said “whenever there’s a free agent of that calibre, males or female, you have to jump on it.” So yeah, despite having a stacked roster, with a lot of highly paid former WWE talent on the books, it seems there certainly more room at the AEW Inn.

Now AEW is back on the road in the United States, Rhodes was also quizzed about the possibility of a UK tour, which has been long delayed because of the ongoing pandemic. Cody said he’d hoped his recent feud with Great Britain’s Olympic Gold medal-winning boxer Antony Ogogo could have taken place on UK soil, but it wasn’t to be.

He said: “When it comes to the United Kingdom, it’s is a massive part of what we do. It’s massive. They’re some of the best wrestling fans on the planet. I had always envisioned that my match with Anthony Ogogo was meant to have happened in the United Kingdom and I would just revel in that whole, fun, patriotic battle.

“I can’t ensure it’s going to happen, but if you run a wrestling company and you don’t intend on going to the UK, I don’t think you really run a wrestling company,” he added during the media call. “So, it’s in our minds, it’s just not on the schedule just yet. But we owe it to the United Kingdom, our partners at ITV, and I hope it’s something we can accomplish.”