Suburban punkette FOE’s recent avant-garde and left-turn offerings have quickly earned her a reputation for confounding and excelling expectations. New single ‘Deep Water Heart Breaker’ – out on August 8 through independent label Stella Mortos who’ve teamed up with Vertigo Records for the release – very much continues this theme. 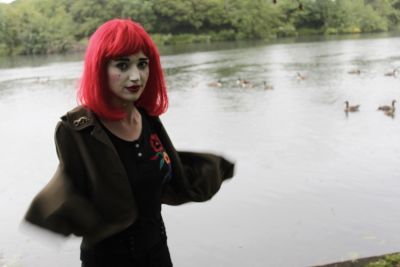 The sinister and stripped back B-side, ‘The Fox’, produced by Entrepreneurs is an elegiac look at the dark and murderous underbelly which lurks beneath the idyllic façade of British suburbia.

Over the last six months FOE has immersed herself in various other projects with like-minded musical nomads such as Entrepreneurs and Ghostpoet. A rework of FOE’s ‘Genie In A Coke Can’ by Alec Empire – front man of German hardcore band Atari Teenage Riot resulted in FOE supporting ATR on their recent UK tour. Another fan of FOE’s border-crossing rock-pop is Steve Lamacq who invited her in for a BBC ‘Introducing Session’.

Coulrophobia sufferers turn away – the new sounds of the suburbs is a wig wearing, painted faced riot grrrl and she is not one for the faint hearted.