Cryptic Age is not your stereotypical Northern rock band. This York-based quartet has created a rather unique brand of heavy sounds. Combining Celtic folk with prog-rock and heavy metal, this group have shaped an ambitious sound which they thrust into the music universe with their latest full-length album ‘Sounds Of Infinity’. 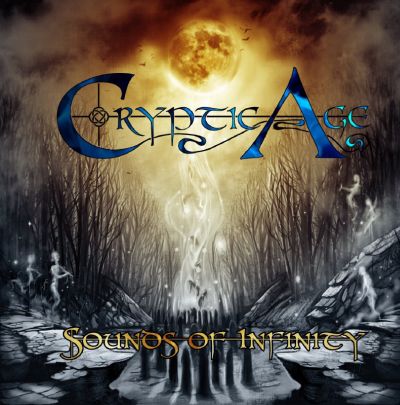 ‘Sheean Ny Feaynid’ opens this fairytale of Celtic metal with mystical sounds and the spoken word. It may be an unusual opening track but it sets the tone of the album very well; this is something different. This is followed by ‘Maelstrom’. The rather unique rhythms and instrumental combinations of this track are cut through nicely by the vocals of singer Jenny Green. With a similar singing style to Tarja Turunen, Green’s voice really compliments the band’s overall sound.

Meanwhile, ‘Fortuneteller’ follows with yet another twist on the Cryptic Age blueprint by presenting the more heavy metal aspects. This mainly instrumental track demonstrates that this unit can stand alone, without the need for vocals. However when Green’s vocals do appear over two minutes in, they allow the harder sounds to merge with the Celtic influences provided by previous tracks. The forth piece on this album is entitled ‘Horsemen Of The Vale’. Another epic track, it tells a mythical tale; containing some infectious rhythms and some impressive guitar solos. ‘Horsemen…’ is a real testament to epic rock tracks of old that bands such as Dragonforce (and the aforementioned) have brought up to date.

The Dforce-esque sounds are again presented in ‘The Aftermath’. This ambitious track encapsulates the atmosphere of Cryptic Age with highly dramatic guitar riffs and poetic lyrics combined with choral vocals and synths. It also gives guitarist Hallam Smith chance to demonstrate his impressive playing. The spoken interlude really allows time for breath before the song dives straight back into some heavy metal riffage. However, this epic song lasts for just over seven minutes and begins to feel slightly drawn out merely for the sake of creating impact.

Next up we have ‘Sea Invocation’, this material has a really infectious vibe with flutes and acoustic instruments. The ballad allows the listener to really experience what inspired the band in the first place. It is a rather beautiful musical piece, giving a break from the thrashing tempos and riffs of the other tunes. It is from this point on that the album shifts, as if settling into its own skin. ‘Perpetually Blind’ follows on nicely on from the peaceful ballad. The track then shifts to something more; a heavy metal piece to be proud of. ‘Perpetually…’ takes notions from previous tracks and allows them to evolve; seamlessly blending the elements of metal and Celtic folk.

With more attitude, ‘Eternity Beckons’ takes the quartet’s music to a new level and keeps it interesting for the listener. Here, Green’s vocals are at their strongest and this piece really shows the power of the band. The spoken word interlude again presents itself giving ‘Eternity Beckons’ a mystical edge. The penultimate song is called ‘Seeking The Cure’. This instrumental and rather experimental track again demonstrates a band that does not solely rely on vocals to carry a tune. The shifts and changes in rhythm and tone let the song evolve effortlessly. The old-school, almost Carlos Santana-like, guitar solo helps shift the tone of the piece into a more classical metal anthem. This eclectic track summarizes the more musical elements and inspirations of Cryptic Age.

The final offering, following nicely from ‘Seeking…’, shifts in tone, back and forth from piano ballad to heavy metal anthem. This blend somehow works, bringing together all of the elements of the album in a rather epic closing track. This lot demonstrate some great potential, with tracks that truly encapsulate their ambitious and unique sound. An album that is unusual in its tone and character, ‘Sounds Of Infinity’ portrays fantastical ballads and folk song, showing a band who really like to experiment with their sounds both old and new.