‘Is This Hyperreal?’ is the new record in the thankfully ever-growing back-catalogue of digital hardcore artists Atari Teenage Riot. 12 years on from their last studio release, this record is just as hard-hitting and intense as the material they were producing in the mid 90s; the same highly political, anti-fascist views and infusing an electronic soundtrack with a clear punk-infused punch. 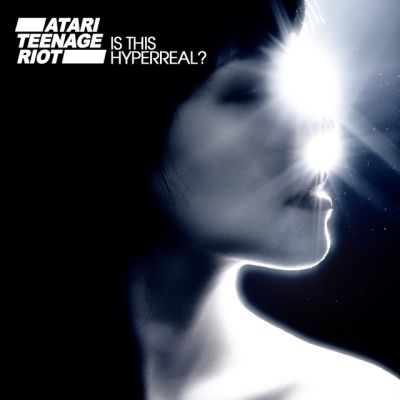 The first single and opening track is called ‘Activate’ and it kicks the album off in a very powerful, meaningful manner, combining a very energetic drum beat with a varied range of vocal styles. This song is also the first track released by ATR that features their brand new MC, CX KiDTRONiK which, with his addition, adds an extra level of diversity to this Berlin-based band’s arsenal. The second single and another stand out track, ‘Blood In My Eyes’, tackles the issue that is human trafficking of woman for sexual exploitation and delivers a low blow to governments of the self-proclaimed “civilised west” for letting it happen right under their noses. With such a strong message being delivered in a truly heavy-as-hell way (the beast is packed full of earth-shattering techno beats), ‘Blood…’ fast becomes our standout.

Although ‘Is this Hyperreal?’ is still a very strong, aggressive album, some of the punkier edge that was present in previous material may have been lost during the band’s sonic development. This is not necessarily a bad thing though, as it showcases how the members have each moved forward and changed over time since the death of previous MC Carl Crack and individual solo work. Indeed, change is something which one should expect following a near 12-year hiatus. One track that seems to have kept a lot of the earlier influences still, is ‘Codebreaker’ and this is definitely set for big things within the live arena and in clubs on a worldwide level – it will inspire brutal, sweaty and delightful pits; there are elements of classic punk here too, with added heavy guitar work ruling supreme where, throughout the rest of the album, electro has been king.

This album has all the trademark ATR qualities that long-time fans will be looking for but with a much more developed style, bringing the digital hardcore genre kicking, screaming and bleeping in to 2011 with a vengeance. On the other hand, if you’ve not heard of this undeniably innovative cult act yet, and you are a fan of electronica but want to try something a bit different with a lot more edge and balls than many of the other genre-crossing acts out there today, then this album could be just what you are looking for.