16volt are back again after nearly two decades of making music more specifically industrial rock. Utilising a blend of the classic band set-up (guitar, drums, vocal and bass) alongside electronic gear (synthesizers, samplers, drum machines and more), this band has come to perfect the skill of mixing of these different sounds that give us the songs we know and love… 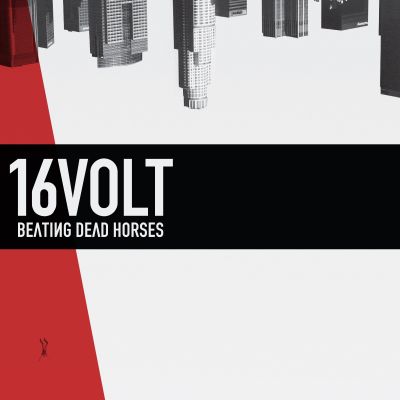 They open up with the title track ‘Beating Dead Horses’ and as you might expect it is not for the faint-hearted. What it is though, is a brutal angst-filled anthemic song ready for a crowd; it starts with a spiteful sample preaching about how great God is and then explodes into an array of electro-tinged surprises and hard-hitting riffs that attack the world’s constant reliance upon religion; this is a huge song and a very fine opener.

Meanwhile, ‘Burn’ is much slower and contains very little of the venom that we have come to expect from Eric Powell. Yes, of course it still has a lot of attitude but it is delivered in a different way; more menacing and emotive in tone. The track represents what is, without question his standout vocal performance on the album. Later, synths serve to add further depth to the texture of this track and help to create on of the most accessible tunes they’ve ever written.

Following on, ‘You Will All Go Down’, ‘We Desintigrate’ and ‘Sick Sick Sick’ present more quality hybrid sounds to the listener – nothing too different to what has been delivered before on previous albums but then, this band has never really needed to change. Indeed, one could argue that now Mr Reznor has put NIN to bed, Powell deserves to take the genre’s crown (backed by his band’s diverse mix of influences)? The emotion and grit that inhabits the heartfelt and seductive ‘You Will All Go…’ for example, could easily translate well on a mainstream film soundtrack and indeed, in to the hearts and minds of a few hundred fans packing out one of our more popular Academy venues. If however, it doesn’t work out like that and more commercial exposure avoids the group once again (at an international level at least), then they should take pride in the fact that they are one of, if not the uncrowned kings of industrial rock music in 2011.

This album is wholly relevant and will appeal to fans of the aforementioned heavier metallic sounds alongside some of the more popular electronic acts of the moment.