The tracklisting for the latest EP from A Place To Bury Strangers makes an interesting read. The mental experimentalists have chosen to include no less than three remixes of the title track ‘Ego Death’and remixing songs isn’t exactly common place in the alternative rock genre, so before we’ve even selected the first track, you could say we’re cautious. 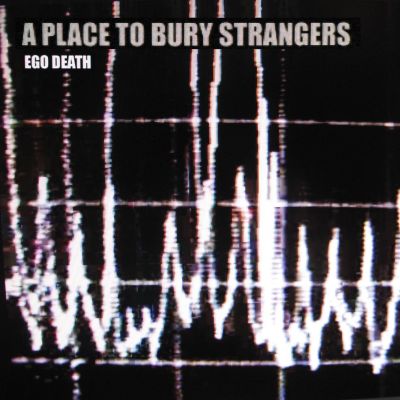 The radio edit of ‘Ego Death‘ immediately pays testament to their reputation as: “the loudest band in New York”, because, it is very loud. The sound of the track is defined very early on, but sadly, we find it difficult to use the adjective as well as the verb, once past the overall noise of it we find little else. Listening to music shouldn’t be hard work, you want to be able to pick out separate components, but also be able to enjoy the song as a whole. The overriding sound here is the gritty, raw distortion of the guitar, which in its place can really impact the harsher end of a rock tune, but here it is thrashed relentlessly from start to finish and in doing so kills every other instrument and the vocals. This makes it very difficult to enjoy, we are left wincing desperately trying to hang on to a melody, a guitar riff, a lyric, but the barrage against the ear drums was just too much.

Follow-up ‘It’s A Fast Driving Rave-Up With A Place To Bury Strangers‘ holds more promise as it opens with a cleaner guitar sound. That being said, the drums sound a little too raw. That was probably an intentional effect to be fair, but as the driving force of a rock song they should be pronounced. Fortunately, when the guitar distortion kicks in, they are thrown to the back of the mix. The song is confused and a little messy. The vocals do carry a haunting characteristic which certainly sets the sound apart, however you soon forget this as the track comes screeching to the end, quite literally.

The second remix by Figo far surpasses all the other tracks on the EP. It is well produced and has a good sound. This one is also a little more varied than other tracks with a real mixture of musical elements including synth and string sounds. Unfortunately, the lyrics are a little uninventive, and the vocals seem to whine on, letting down the rest of the mix. Eventually you have the feeling that this style is better suited to large speakers in large venues than your Ipod.

‘Exploding Head‘ is another bass-driven track, with a catchy bassline standing out as the catchiest element. Again the vocals let down the rest of the song, opening with a bizarre vocal moaning noise that continues and seems to be intended as the substance of the chorus. This would work better as a dub track if the vocals were taken out, in this writer’s opinion.

Finally, we come up against the final remix of ‘Ego Death‘ (by Allen Blickle of Baroness). This tune is dynamic and interesting but honestly, it never seems to get started. As with all of these songs you feel it is building towards something that never comes. The same vocal tone makes the collection a little repetitive, and the relentless reverb effects only contributes to the same deep, noisy end. Established fans will of course love it, but this recording really is all about the distortion and bringing the noise…seriously. So, that won’t be everyone’s cup o’ tea.