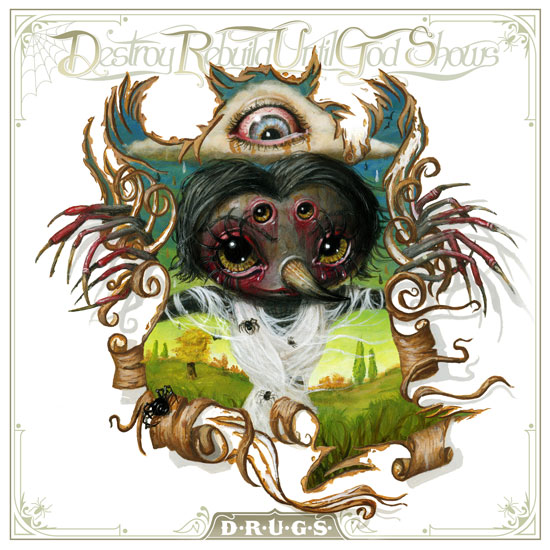 Born and raised in Moscow, Ayin Aleph is a classically trained pianist now settled in France, mixing, as her website puts it, metal, baroque, and German 19th century romantic music to land somewhere between lyrical metal and symphonic rock to create a genre quite unlike anything we’ve heard before, which means it’s difficult to draw parallels to describe the kind of thing you can expect from this album. It’s evident a new and original sound is being aimed for, but the result is rather more like Kate Bush if she was high. Perhaps not quite what was being aimed for, there. However, the sound of tracks like ‘The Purchase Of The Cathedral‘ and ‘The End’ do give you a very religious-house feeling, which might demonstrate some more success in intentions, theology and the vibe of a somewhat gothic church being perhaps the most continuous offering of the entire album.

The album sounds a little like the kind of almost-melancholy avant-garde you’d expect to find in a terribly arty little cafe somewhere, though we’ve not sure who’d be listening. We almost feel like we’re missing the point of what, it has to be said, is impressive musical skill (having played piano since the age of four, hardly surprising) and an undoubtedly talented voice, though used in odd, sporadic ways, from operatic to a huskier sound, which does often make the lyrics fairly difficult to understand. Though having said that, there are moments, most notably in ‘My Bloody Marriage’ (which reminds this scribe of when her Dresden Dolls album went wrong and started playing at the wrong speeds) where you can’t help but think, that’s pretty cool, albeit in a weird way. It is, however, much easier to site other parts of the album, such as ‘Choirs Water Death’ or ‘Aleph’, that leave you feeling a little bemused.