‘Sans Souci’ is the debut album from Brontide, and unless if it’s a reference to Heineken’s Italian lager or to the location the name comes from the French for “without worries”, which is very apt. Perhaps the lack of worries comes from not having a lead singer hogging the limelight, and for those not in the know, there is no vocalist at all, or lyrics, whatsoever. Whilst on the “did you know?” bandwagon, Brontide actually means the low rumbling noise heard within thunder. The band is subtlety stating their intentions and purpose early on, and for the listener’s pleasure, they live up to it. 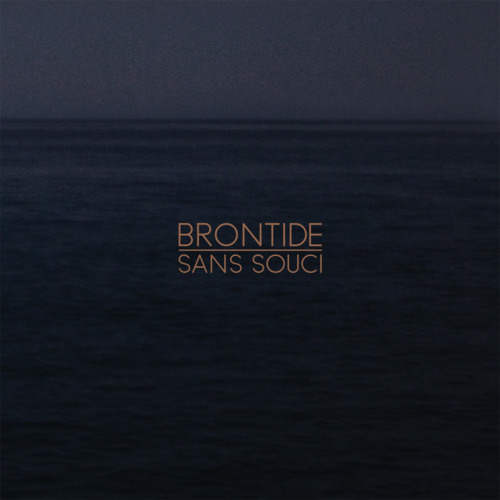 As the album gets into gear like a greased up road hog ready for the dirt track; an uncanny similarity to Tool arises from some rather spacey yet constantly building noise being revved, and within just a couple of minutes it becomes evident that there’s some definite gusto packed in this punch. In fact the toying with Tool tickles the grapes so much even Maynard James Keenan must’ve had to double check if it was his own sneaky digits doing the dirty work. Whilst this is often the case within ‘Sans Souci’, especially on the opening track ‘Matador’, it cannot be said the album lends too heavily from such artists, as many other comparisons come into the fray.

Whilst the record has grown comparisons to the work of the band Battles, it doesn’t really do Brontide’s individualism justice. At times one can say they sound like anything from Kyuss, such as title track ‘Sans Souci’, then they can suddenly sound like At The Drive or SikTh, albeit without the airport terminal announcement wailing, and at times on ‘Limehouse Ink’ slightly alike to Deftones (… well, you know, on ‘Adrenaline’ when you’d skip all the way to the bonus track? Don’t pretend you didn’t!) and even at the odd point the inner gamer questions whether the ‘Destruction Derby 2′ soundtrack had accidentally made its way into the speakers. The band’s earthy but heavy sound can be gripping, whether from quick sparkles of high pitched guitar work lightly dancing over rough, foot-stomping drumming to a more unified thud it is hard to escape the raw attitude present, you are listening to rock, and Brontide don’t let you forget that. But these comparisons are only ever part of the tracks, and as such throughout they never stop sounding like Brontide, they become unmistakable, something rather impressive in this current era that caters for so many. ‘Bob Munden’, which can only be assumed is named after the highly impressive gunman, is one of the stand-out tracks that shows the band drift between the aforementioned likenesses and also highlight their uniqueness which has brought these inspirations together.

Sadly towards the more distant end of the album the band’s decision to make music without a vocalist becomes maybe a little morbid as, for a brief point at least, the album merges all a bit too seamlessly leaving the listener to wonder if/when a track has begun or ended. Whilst the thunder is impressive, the lack of lyrics sometimes dampens the electric feel of lightning. But, to let such factors be regarded as “missing” would be to sidestep the point entirely, this is music, and more often than is usually appreciated the greatest lyrics are sometimes played by the instruments.

‘Sans Souci’ begs to be played loud and the last thing you want to do is disappoint it, but don’t allow it too much attention, treat it mean and keep it keen, play it while driving, listen to it at work, have friends round and let it run riot as you enjoy a few home brews, but pay it too much attention and you might be left wishing it had just a tiny bit more to it. The band are currently touring the country and may just be this side of the pond’s current best chance to feel like you’re sipping cacti in the dusty Texan desert rock heat. All in all ‘Sans Souci’ is a terrific and moody entry from Brontide, and hopefully not the last heard.