Of course, it’s very easy to make fun of Creed – what with lead singer Scott Stapp’s drunken ramblings, or the accusations of god-bothering in their imagery (the video for their 2001 mega-seller ‘With Arms Wide Open’ being a prime offender) or the fact that they were one of the main offenders in the glut of WWE-friendly grunge-metal crossover wannabe bands that so marred the music scene in the late 1990s. However, even their strongest critic would probably have to admit that what they do, (anthemic choruses, soaring vocals, thunderous drumming and chugging down-tuned guitars) they do very well. After all, not many bands can claim multi-platinum sales of their first three albums, right? 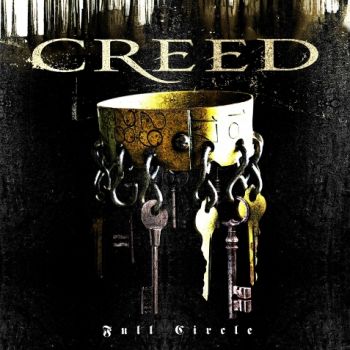 Really, if you think about it, is it fair to make fun of them because of their singer’s substance abuse, or the content of their lyrics? After all – do we make fun of The Doors because of Jim Morrison, or Led Zeppelin because of ‘Kashmir‘? No – we idolise them. Sure, we may all like to pretend that the era of hair-metal never existed, or that nu-metal was just a particularly obnoxious bad dream…but the sad truth is that we probably all bought a Bon Jovi record (or worse, wore ultra-baggy jeans and a red baseball cap) when we thought no-one was looking, right?

And so we come to the meat of the matter – that Creed have a new album out – ‘Full Circle‘ is their sixth so far, allowing them to be quite fairly removed from the realms of “the one-hit-wonder” that many of their contemporaries now inhabit and that they seem to have come back from the brink in quite some style. All the good things about the band are there – if the album’s fifth track and second single ‘Rain‘ had been released ten years ago we’d be looking at another radio-hogging monster – and a lot of the bad things are gone. The band themselves look healthy and seem to be having fun again, and even if things seem to have become more than a little self-referential – the album’s title, the fact that the opening track is called ‘Overcome‘ and that seventh track ‘Fear‘ features the refrain “leave the past behind, forget everything you know, make a change, let go”- then that can only be a good thing when you consider what they could have been like.

Yes, it can be a little same-y in places, and chances are they’re never going to be the most fashionable band on the block, but to give them their credit this is a far better album than we ever expected. Give it a listen yourself – you might just be surprised.

Watch the video for ‘Rain’ below: