Dope Stars Inc. are without question one of the international Industrial scene’s most exciting and popular acts at the minute and with ‘21st Century Slave’ they do not disappoint. 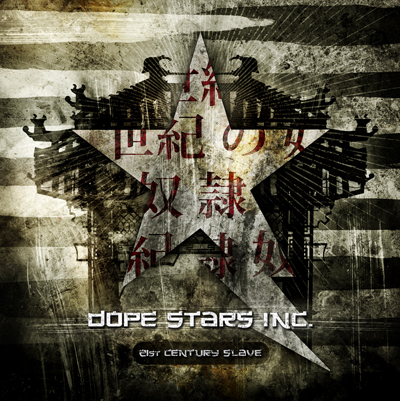 Opening track ‘Omegadrones’ is a pulsating electro-metal dance-off with flaming punk vocals and beats that will vibrate you to your very soul. The following title track is a cyber-assault of furious guitars, anthemic gang vocals and atomic drum beats that will appeal to Alternative DJs everywhere. ‘It’s Today’ fires off on all cylinders next with emotive guitar lines and cutting synths for a blistering four minutes of emotive electro-rock goodness that pours some searing guitars into the mix with pop-infused synths and jackhammer beats for a huge mix that will be sure to appeal to both hardened metalheads and the colourful cybergoth crowd. It’s a definite dancefloor filler.

Next up, ‘When I See You Smile’ will simply make your ears bleed. This is powerful death–pop for the masses. Coming on like Deathstars but with balls, the song blends infectious melodies, distortion-fed shredding and resounding drum sounds. This track will resonate with many a listener and it will probably blow your lobes off. Meanwhile, ‘Digital Warriors’ is an anthem for contemporary Industrial music lovers that will compete with their previous club standout ‘Bang Your Head’. This one comes complete with the essential fist-pumping chorus and euphoric head-banging moments. ‘Digital…’ is an essential track for the live arena and it will have you sweating all the way down to your humungous boots. The band then hits the naughty spot with ‘Megacorps’ and some excellent classical guitar elements that intermingle nicely within raw vocals that build and build toward a solid finish.

To follow up, ‘Criminal Intents’ rocks hard and attacks the senses with brutal beats and 80s-style keyboards for an all-out glam-rocker that’s constructed using mighty libidos, loads of glitter and some punk-as-fuck attitude. ‘Neuromantics’ lifts off with drum and bass-baiting sounds, fierce synths and strong vocals. This is probably the most ambitious track on the record and it’s a potential sing-a-long effort that blends slow and fast tones for a truly gripping piece of work. Similarly, ‘Outlaw Thrones’ is without question the most epic tune on here; it’s an opera of electro noise. Winding keys smack against the ears and clash with unforgiving drums while Victor Love’s vocals are ever-angry and evocative. ‘The World Machine’ then strikes hard and fast with a spiteful wit and some venomous sounds that will surely cut to your very core; it’s a delicious dose of dark-electro for the masses. Final offering ‘It’s For You’ is the best track on the record and it’s a real contrast to the other songs on the disk, more influenced by early Cure than Ministry, this one will surely surprise and impress with its soothing tones and grand structure.

While ’21st Century Slave’ doesn’t make any major adjustments to DSI’s tried and tested formula of monstrous cyberpunk, it’s certainly their most vibrant and accessible record to date. If you like heavy crossover music, you need to check this bad boy out.